Ball lightning, is a strange and so far unexplained natural phenomenon, whose existence some scientists still dispute and no conceivable scientific theory can make sense of the phenomenon. It is usually associated with thunderstorms, but lasts considerably longer than the split-second flash of a lightning bolt.

Many of the early reports say that the ball eventually explodes, sometimes with fatal consequences, leaving behind the odor of sulfur. There are records of free-floating glowing balls that occur in total absence of thunderclouds.
This occurs commonly in the valley of Hessdalen, Norway. One of the earliest descriptions was reported during The Great Thunderstorm at a church in Widecombe-in-the-Moor, Devon, in England, on 21 October 1638.

Four people died and approximately 60 were injured when, during a severe storm, an 8-foot (2.4 m) ball of fire was described as striking and entering the church, nearly destroying it. Large stones from the church walls were hurled into the ground and through large wooden beams.

The ball of fire allegedly smashed the pews and many windows, and filled the church with a foul sulfurous odor and dark, thick smoke. The ball of fire reportedly divided into two segments, one exiting through a window by smashing it open, the other disappearing somewhere inside the church.

In December 1726 a number of British newspapers printed an extract of a letter from John Howell of the sloop Catherine and Mary:“As we were coming thro’ the Gulf of Florida on the 29th of August, a large ball of fire fell from the Element and split our mast in Ten Thousand Pieces, if it were possible; split our Main Beam, also Three Planks of the Side, Under Water, and Three of the Deck; kill’d one man, another had his Hand carried of, and had it not been for the violent rains, our Sails would have been of a Blast of Fire.”

One particularly large example was reported “on the authority of Dr. Gregory” in 1749: “Admiral Chambers on board the Montague, November 4, 1749, was taking an observation just before noon…he observed a large ball of blue fire about three miles distant from them. 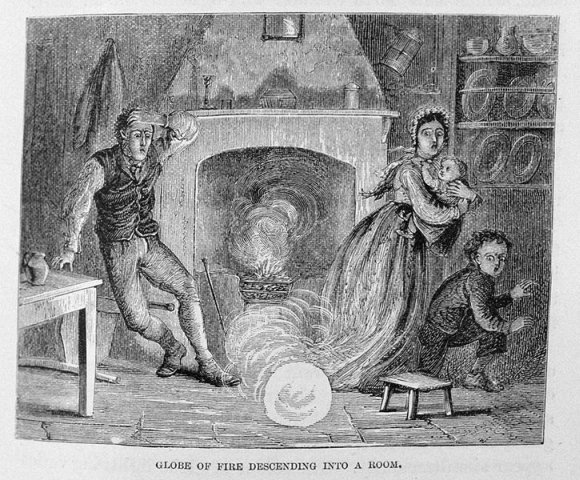 “They immediately lowered their topsails, but it came up so fast upon them, that, before they could raise the main tack, they observed the ball rise almost perpendicularly, and not above forty or fifty yards from the main chains when it went off with an explosion, as great as if a hundred cannons had been discharged at the same time, leaving behind it a strong sulphurous smell.

“By this explosion, the main top-mast was shattered into pieces and the main mast went down to the keel. Five men were knocked down and one of them much bruised. Just before the explosion, the ball seemed to be the size of a large mill-stone.”

The first investigator to describe ball lightning in the scientific literature was G. W. Richman, a Russian. Tragically and ironically, his interest led to his de̳a̳t̳h̳. The incident took place in 1754 during a thunderstorm, when Richman was attempting to measure the energy of a lightning strike.

While the experiment was under way, ball lightning appeared and traveled down the string, struck Richmann’s forehead and killed him. The ball left a red spot on Richmann’s forehead, his shoes were blown open, and his clothing was singed. His engraver was knocked unconscious. The door frame of the room was split and the door was torn from its hinges.

An English journal reported that during an 1809 storm, three “balls of fire” appeared and “attacked” the British ship HMS Warren Hastings. The crew watched one ball descend, killing a man on deck and setting the main mast on fire. A crewman went out to retrieve the fallen body and was struck by a second ball, which knocked him back and left him with mild burns. A third man was killed by contact with the third ball. Crew members reported a persistent, sickening sulfur smell afterward.

In Paris in July 1849, during an electric storm, a red ball hovered about twenty feet above a tree. Abruptly it caught fire, burned up, and burst open, freeing jagged streaks of lightning to shoot in all directions. One hit a nearby house and blew a cannon-sized hole in it.What remained of the ball started to spin and spark and then exploded with great force, knocking down three pedestrians.

On July 5, 1852, an incident occurred moments after hearing a sound like a thunderclap, a Parisian man reportedly witnessed an extraordinary sight: a fireball the size of a human head emerging from the fireplace of his fourth-story Paris apartment. It pushed aside the frame covering and darted toward him “like a cat.” 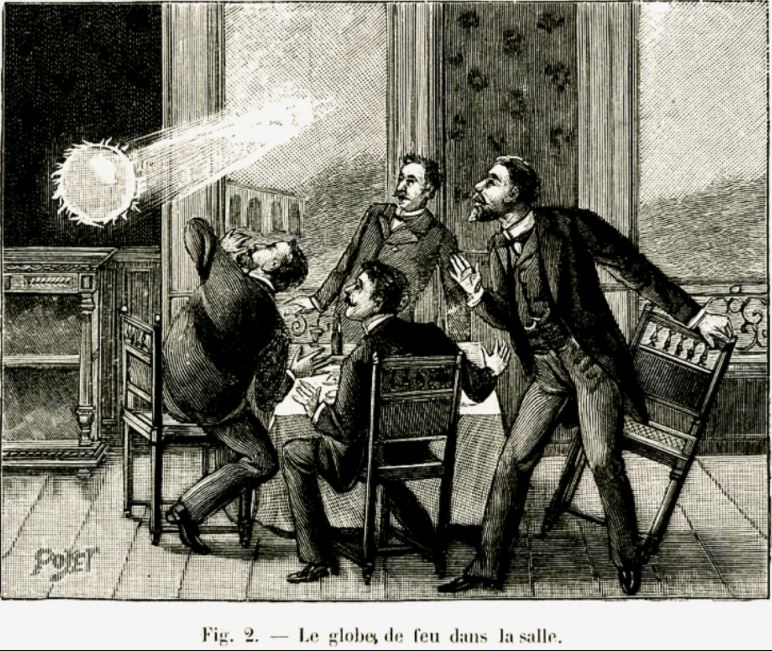 He hastily withdrew his feet, and the ball moved to the center of the room. Though bright, it gave off no discernible heat. It ascended slightly, headed back to the fireplace, and rose up the chimney, exploding just before it escaped into the open air. It caused considerable damage to the chimney top.

At 6:30 p.m. on October 8, 1919, at a busy downtown intersection in Salina, Kansas, a “ball of fire as large as a washtub floating low in the air” struck the side of a building, ripped out bricks, and demolished a second-story window.

It then exploded with a “bang that resembled the noise made by the discharge of a large pistol, filling the air with balls of fire as large as baseballs, which floated away in all directions,” according to a Monthly Weather Review correspondent in the October 1919 issue.

“Some of these balls followed trolley and electric-light wires in a snaky sort of manner and some simply floated off through the air independently of any objects near by. An electric switch box across the street was ripped open and a transformer destroyed, leaving the east side of the town in darkness.”

In the summer of 1960, as Louise Matthews of South Philadelphia, Pennsylvania, lay on her living room couch, she looked up to see a huge red ball coming through a window and the Venetian blinds, both closed and neither damaged in any way by the object’s passage. When the ball, which was making a sizzling sound, passed by her, Mrs.Matthews felt a tingling on the back of her neck.

She put her hand to the spot but felt nothing. The ball went through the living room and into the dining room, exiting — again without damage — through a closed window. She called her husband, who came home from work to find the back of her hand burned. The hair at the back of her head fell out, leaving the skin there as smooth as that in the front of her face.

During a violent early-evening thunderstorm on August 12, 1970, a “red ball of fire” appeared above Sidmouth, England, crackled for a few seconds, then exploded with a deafening roar. Jagged flashes of lightning shot from it toward the ground. At that moment 2,500 area television sets were cut off.

A particularly dramatic incident took place in January 1984 inside a Russian passenger plane. The crew saw a glowing light, four inches in diameter, in front of the cockpit. It suddenly vanished with a deafening roar, only to reappear seconds later — after piercing the fuselage in some mysterious fashion — in the passengers’ lounge. 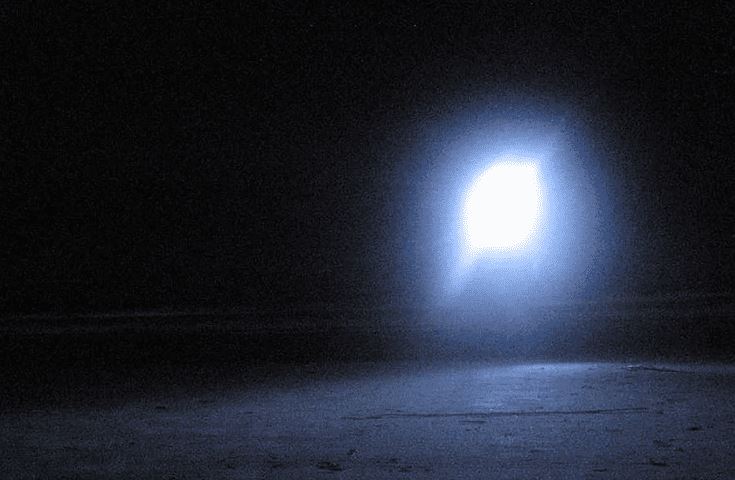 As the passengers looked up in disbelief, the spherical object sailed above their heads until it got to the tail section, where it divided into two glowing crescents. The crescents then merged into a single object and departed. Later, when mechanics examined the aircraft, they found a hole in front of the fuselage and another in the tail.

An attempt to explain ball lightning was made by Nikola Tesla in 1904, but there is at present no widely-accepted explanation for the phenomenon. Several theories have been advanced since it was brought into the scientific realm by the English Physician and electrical researcher William Snow Harris in 1843, and French Academy scientist François Arago in 1855.
Much of the problem of explaining (as opposed to explaining away) the ball-lightning phenomenon has to do with the varying descriptions witnesses have given. The ball either explodes loudly or vanishes silently; it is white, orange, red, blue, or purple; it is small or it is large; it survives for a few seconds or a couple of minutes.

“These may seem like trivial distinctions,” science writer Gordon Stein observes, “but they cause theorists no end of difficulties. Explanations that will work for a ball of one second’s duration, for example, cannot account for a 10-second ball.” A ball that lasts one minute or more “requires an energy content so high that there is no known way for it to be formed.”