On January 2002 Dr. Murli Manohara Joshi, the Indian government’s minister for science and technology confirmed that oceanographic researchers of the National Institute of Ocean Technology, part of his ministry, had found remnants of a sunken city in the Gulf of Cambay, 30 kilometers off the shore of northwestern India.

Sonar photographs of the ocean bottom revealed large, rectangular, walled structures extending 9 kilometers along the banks of an A̳n̳c̳i̳e̳n̳t̳ riverbed, now 40 meters underwater.
To confirm that the sonar images did represent a human habitation site, the researchers dredged up over 2,000 artifacts, including semiprecious stones, stone tools, and human bones. A piece of wood from the underwater site yielded a radiocarbon date of about 9,500 years. 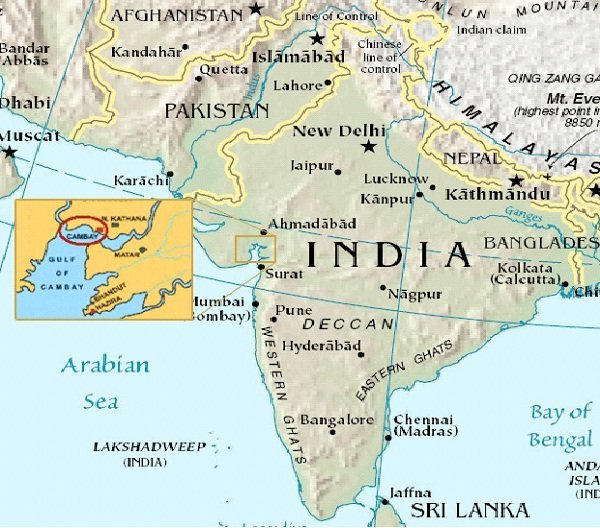 The startling discovery occurred on Spring 2001, 25 miles off the coast of Gujarat, India. It took place in part of the Arabian Sea known as the Gulf of Cambay.

India’s National Institute of Ocean Technology (NIOT) turned up some amazing sonar images from the gulf’s depths while scanning for pollution levels. Using equipment that penetrates the sea floor, marine experts discovered a pattern of distinct man-made formations across a five-mile stretch of sea bed.

According to reports published worldwide, NIOT’s sonar imaging technology detected what appeared to be the stone pillars and collapsed walls of at least two cities. 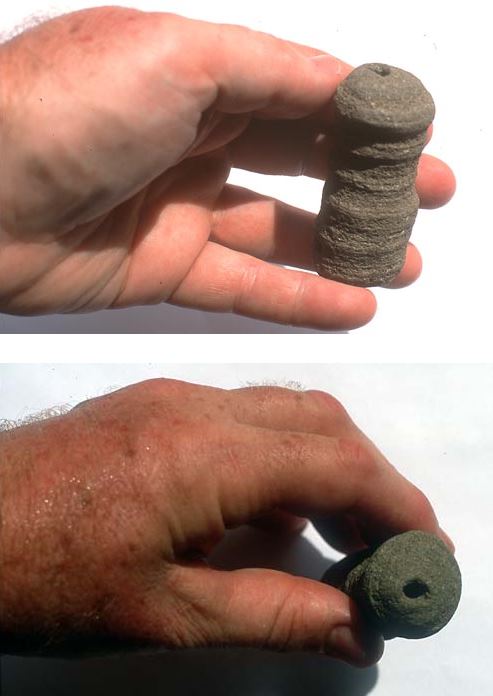 Small asymmetrical cylindrical object, exact dimensions unknown, roughly 4-5cm in length, by Icm in diameter.
Ridged or turned effect on outer surface, looks as though it could have been turned on some sort of lathe. There is a hollow passage through the middle, possibly drilled. (Source: https://grahamhancock.com)
The site was described as part of an A̳n̳c̳i̳e̳n̳t̳ river valley civilization not unlike the Saraswati of the Rig Veda, thought to be mythical but—according to recent independent findings by Indian scientists—now proven to have flowed to Gujarat.

Divers at the Gulf of Cambay site later retrieved from depths of 120 feet, 2,000 man-made artifacts, including pottery, jewelry, sculpture, human bones, and evidence of writing, according to the Times of London.

Author and underwater researcher Graham Hancock described buildings at the site as being hundreds of feet in length, with drains running along the streets.

“Underwater structures that have been found along the Gulf of Cambay, Gujarat, indicate an A̳n̳c̳i̳e̳n̳t̳ township that could date back anywhere before or during the Harappan civilization,” Science and Technology Minister Murli Manohar Joshi told the world at a press conference in May of 2001.

Joshi’s initial guess was that the 5-mile-long site was 4,000 to 6,000 years old and submerged by an extremely powerful earthquake.

But in January of 2002, carbon dating revealed that an artifact from the site was astonishingly A̳n̳c̳i̳e̳n̳t̳, between 8,500 and 9,500 years old—the oldest known civilization in the world by thousands of years—a time when, according to orthodox archaeological standards, India should have been peopled with primitive hunter gatherers and a few settlements, not inhabitants of a lost civilization. 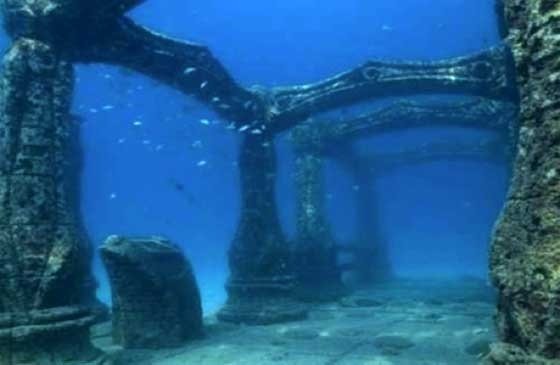 If it turns out that the 9,500-year-old sunken city in the Gulf of Cambay was inhabited by people of Vedic culture, this would, of course, completely destroy the fiction that Vedic culture came into India by an Aryan migration from Europe or Central Asia some 3,500 years ago.

It would instead lend support to the A̳n̳c̳i̳e̳n̳t̳ Sanskrit histories, and open the way for research showing that the history of Vedic culture in India goes even further back in time.