In 132 A.D., the world’s first seismoscope was invented in C̳h̳i̳n̳a̳ by a Chinese astronomer, mathematician, engineer, and inventor called Zhang Heng.

The instrument was said to resemble a wine jar six feet in diameter, with eight dragons positioned face down along the outside of the barrel, marking the primary compass directions.

In each dragon’s mouth was a small bronze ball. Beneath the dragons sat eight bronze toads, with their broad mouths gaping to receive the balls. 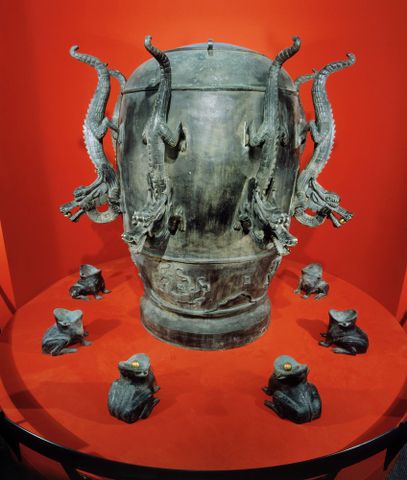 When the instrument sensed an incoming seismic wave, one of the balls would drop and the sound would alert observers to the earthquake, giving a rough indication of the earthquake’s direction of origin.

Historical accounts tell of its great accuracy, though its precise design remains a mystery. The outer appearance and functioning is known for certain, but its inner workings remain open to speculation. The replicas have been built on the best guesses from such speculation.

From the earliest times, the Chinese were concerned with the destructive force of earthquakes. It was recorded in Sima Qian’s Records of the Grand Historian of 91 BC that in 780 BC an earthquake had been powerful enough to divert the courses of three rivers.

It was not known at the time that earthquakes were caused by the shifting of tectonic plates in the Earth’s crust; instead, the people of the A̳n̳c̳i̳e̳n̳t̳ Zhou Dynasty explained them as disturbances with cosmic yin and yang, along with the heavens’ displeasure with acts committed (or the common peoples’ grievances ignored) by the current ruling dynasty.

In 132, Zhang Heng presented to the Han court what many historians consider to be his most impressive invention, the first seismoscope.

It was named “earthquake weathervane” (houfeng didongyi lit. instrument for measuring the seasonal winds and the movements of the Earth), and it was able to roughly determine the direction (out of eight directions) where the earthquake came from.

According to the Book of Later Han (compiled by Fan Ye in the 5th century), his bronze urn-shaped device, with a swinging pendulum inside, was able to detect the direction of an earthquake hundreds of miles/kilometers away.

The first ever earthquake recorded by this seismoscope was supposedly somewhere in the east. Days later, a rider from the east reported this earthquake.

In 2005, scientists in Zengzhou, C̳h̳i̳n̳a̳ built a replica of Zhang’s seismoscope, estimating the content of the inner mechanism by using technology that was available during the great inventor’s time.

They used the replica to detect simulated earthquakes based on waves from four different real-life earthquakes in C̳h̳i̳n̳a̳ and Vietnam. The seismoscope detected all of them. As a matter of fact, the data gathered from the tests corresponded accurately with that gathered by modern-day seismoscopes.