In 1838, Kimberley, Australia, several cave paintings were discovered that shock the archaeological community.

Some of the paintings that are called the Wandjina are surprisingly large, reaching up to 6 meters in height. The Wandjina paintings have common colors of black, red and yellow on a white background.

They appear alone or in groups, vertically or horizontally depending on the dimensions of the rock, and can be depicted with figures and objects like the Rainbow Serpent or yams.

The Kimberley regions is a remote area in Australia, sparsely populated and visited but with large rivers and magnificent views of beautiful reddish tones.

Among the cave paintings found in the region, the biggest depictions measuring up to six meters in height, has caught the attention of researchers who have already suggested several theories about who their creators were.

The tradition of the Wandjina are as incredible as the depictions. It is an oral tradition handed down from generation to generation. The natives see the Earth as the great serpent Ungut.

The Milky Way looks like another serpent, called Wallanganda. These two snakes led to the creation of all living creatures on Earth, including the ancestral spirits of indigenous Peoples and the Wandjina who brought rain and fertility.

According to aboriginal mythology, it is said that the Wandjina are the spirits, or also called the gods, who lived during the period of creation.

After the Wandjinas were created, they came down to our planet from heaven in the Time of Dreams traveling through the region, roaming the lands. 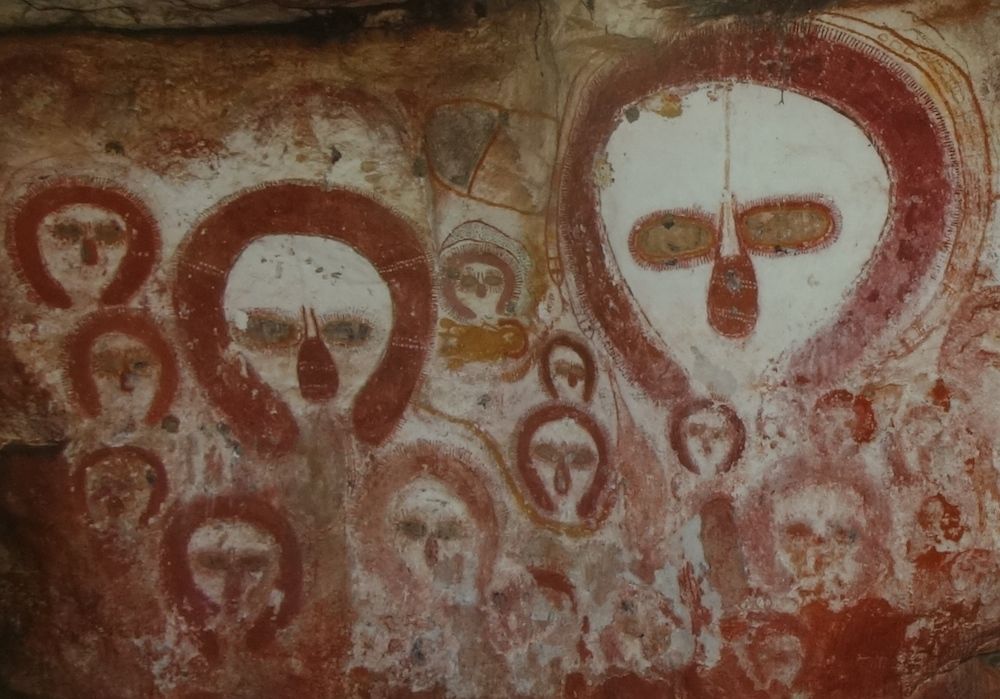 According to the artist Mowanjum Mabel King, during the Lai Lai (Time of Creation or of Dreams), Wallungunder, the “Great Leader” Wandjina, came from the Milky Way to create the earth and all its inhabitants. The Wandjina are deeply connected with the heavens according to most indigenous tribes.

In Aboriginal mythology, the Wandjina were cloud and rain spirits who, during the Dreamtime, created or influenced the landscape and its inhabitants.

When they found the place they would die, they painted their images on cave walls and entered a nearby waterhole. The Wandjina style dates from around 3800 B.P., following the end of a millennium long drought that gave way to a wetter climate characterised by regular monsoons.