Despite scientists’ best efforts and million-volt equipment, ball lightning has never been produced in lab conditions. This enigmatic phenomenon has been reported since A̳n̳c̳i̳e̳n̳t̳ times and until recently, it was considered a product of imagination.

It usually appears near the ground during thunderstorms although it sometimes manifests itself on clear weather. Its size can range from a few inches to several feet in diameter and it takes on multiple colors, most commonly red, yellow and orange. Ball lightning typically disappears in a few seconds although in a few instances it was visible for more than a minute.

It often makes a hissing sound and leaves behind a distinctive smell of ozone or burning sulfur. It sometimes disappears with a loud burst and on some cases it even left behind a mist or solid residue.

The existence of ball lightning has been proven by the traces of physical damage it left behind, burning objects and even injuring or killing animals and people alike.

According to witness testimonies, ball lightning exhibits some of the weirdest properties seen in nature. It has an unexplained tendency to enter people’s homes, sometimes through chimneys or even by squeezing through keyholes.

In some cases, it melted its way through solid panes of glass, leaving perfectly circular holes behind. In other cases, it passed right through walls. It was even reported materializing inside a flying airplane, entering the cockpit and exiting through the tail section. 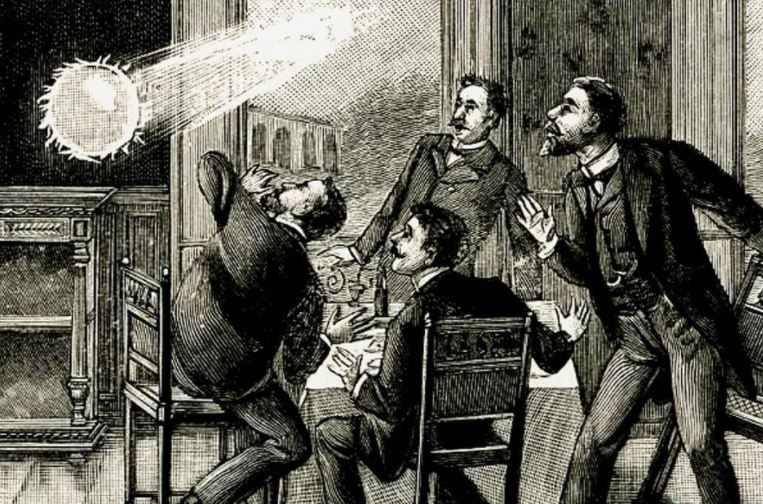 However, the strangest reports are those that include ball lightning exhibiting signs of intelligence. Yes, we’re just as puzzled as you are.

According to several credible reports, people have been chased up and down stairs or circled by ball lightning. In several cases, it even appeared to lose interest, distance itself and explode without harming the understandably shaken human.

This seemingly intelligent behavior has led some to believe ball lightning might actually be some ephemeral form of life, unlike the DNA-based one we are accustomed to. If so, it must be one of the most interesting ultra-terrestrials we’ve heard about.