History is an amalgam of theories demonstrated through archaeological finds. Modern history on the other hand is almost the same, but it disregards any discoveries trying to pierce the thick wall of paradigmatic conceptions established so far.

With this in mind, historic data that has been spoon-fed to us during the modern age could be lacking “undesired” details that would put our entire existence in a novel perspective.

If this is truly the case, the only question remaining is: why would they do such a thing? But the matter is too convoluted to give a complacent answer, so you better have a look at some of these history-challenging discoveries.

The Ica Stones are a monumental collection of over 15,000 artifacts made of grey andesite with rigorous carvings depicting dinosaurs, advanced medical procedures, and other intriguing devices such as telescopes.

Since so many Ica stones exist, there is great variety when inspecting the carved patterns and shapes, and also their size, which ranges from pebbles to rocks of considerable proportions.

Although some of the stones seem to display styles of nearby cultures such as the Paracas, Tiwanaku, Nazca or the Inca, other designs have baffled researchers because they can’t seem to establish any analogy with other known cultures.

Some of the most common symbols present on the Ica stones show various animals, fish and flowers, but the most exquisite reveal dinosaurs, mythological creatures, advanced pieces of technology and what appears to be a heart surgery procedure.

To the left, men looking through a telescope or hourglass. Right side appears to depict surgical procedure of some sort.

Other stones have symbols and geometrical images that perfectly match some of the Nazca geoglyphs.

To the right is a Nazca geoglyph, almost identical to the symbol present on one Ica stone to the left.

As any challenging discovery, the story of the Peruvian stones revolves around a controversy that’s casting a shadow of doubt over their authenticity. But is this intriguing collection truly a forgery, or is there rather a conspiracy in place orchestrated by the powers that be? Let’s judge that based on the known facts:

The controversial Ica Stones were unearthed in the Ica region of Peru. It was 1966 when Peruvian physicist Javier Cabrera Darquea had first brought the stones into the open. According to his accounts, he first received a stone on his 42nd birthday from his friend and it bore a representation of an extinct fish.

Fascinated by the topic of Peruvian history, Cabrera embarked on a mission to collect more of these remarkable stones, if there were more indeed.

During his trek for unusual relics, he came across two brothers, collectors of pre-Inca artifacts, who sold him about 300 of such stones. Cabrera had then realized there could be more of these stones, and a historical treasure trove was waiting at the end of this mission if he were to be successful.

Determined to elucidate this mystery, Cabrera had further wondered in search of similar relics and he eventually met a farmer named Basilio Uschuya who claimed to have a hefty collection himself which he had found inside a remote cave exposed after the Ica River had overflowed and ravaged a nearby slope.

By the 1970s, Cabrera’s collection of unusual Peruvian stones numbered more than 15,000, in most part due to the trade he’d done with Basilio. Although the farmer hadn’t disclosed the exact location of the cave, he sold the artifacts to Cabrera, for he alone found no practical use for them. So, here’s where the story becomes really controversial.

After news of the out-of-place cache of stones had reached the ears of westerners, everyone was anxious to see them up-close and inspect them. The first major outlet to cover the story was BBC.

They filmed a documentary that had drawn even more attention to the case, and soon after the Peruvian government tailed into the matter because it was forbidden to sell the country’s antiquities.

Cabrera was now risking years in prison and his collection of artifacts were hanging by a thread. It was then when he decided to rescue his freedom and newly developed hobby by claiming that the Ica stones were all elaborate forgeries made by his own hands.

He said that all 15,000 stones he had at that moment were manually engraved using a dental drill. It was enough to please the government, but Cabrera never actually stopped spreading his message about the mysterious stones.

Years later, the man published a book named ‘The Message of the Engraved Stones of Ica,’ where he revealed his conceptions and ideas regarding the stones. He wrote that these artifacts show that our forefathers lived among dinosaurs and that “…through the transplantation of the cognitive codes to highly intelligent primates, the men from outer space created new men on earth.”

In 1996, he had inaugurated his personal museum where he displayed thousands of the Ica stones and soon after people started wondering if humans didn’t coexist with dinosaurs before their brisk demise.

Another proposed theory was that the artifacts are remnants belonging to a civilization previously unknown to us. None of this ideas has been well received inside academic circles, and the reason is understandable. 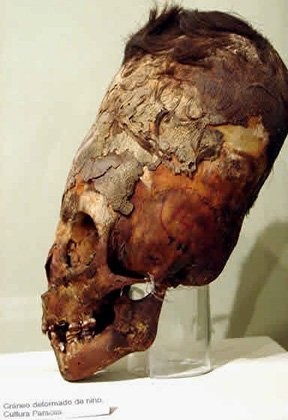 One of the elongated skull discovered nearby, in the Paracas Peninsula

According to those advocating for the artifacts of Ica’s authenticity, early humans could have escaped the devastating effects of the meteorite that had wiped the dinosaurs due to their appropriate stature which allowed them to fit into tight spaces such as crevices or underground shelters.

Other researchers have argued that stones with similar engravings were found inside three different graves in the Ica region different than those found by Uschuya.

Archaeologist Alejandro Pezzia Asserato who was responsible for the find had dated the relics to between 400 BC and 700 AD. His discovery had been published in 1968 and included various drawings of the engraved shapes.

Aware of this game-changing and messy detail, skeptics have still argued that Cabrera forged the Ica stones, at least the pieces with the most spicy representations, and sold them to secure a fortune.

We cannot dismiss this possibility either, but as Cabrera has asserted, this is a collection hard to manufacture even if there were multiple forgers involved. Alone, a man would needed 40 years of daily stone carving to reach this tremendous feat of 15,000 pieces and counting.

Another problem is that Cabrera’s stones are lacking a proper age verification since there has been no organic material present on them, and the cave where they were allegedly found was lost to the blackness of time upon its discoverers final departure.

Since not all pieces were put head to head, more time is needed to crack this mystery completely. For now, the Ica stones stand as reasonable evidence of a forgotten culture that had once buried a fascinating legacy that challenges mainstream historic ideas.

What do you think to be the case?