Emery Smith: I’ve Worked With Alien Spaceships That Would Change The World As We Know It – Science Mystery News Skip to content Emery has provided detailed accounts of autopsying over 3,000 a̳l̳i̳e̳n̳ specimens, and over 1200 nearly complete bodies. As a result, we are gaining new intel about the massive number of a̳l̳i̳e̳n̳ species we share our universe with.

Smith claims work is taking place on e̳x̳t̳r̳a̳t̳e̳r̳r̳e̳s̳t̳r̳i̳a̳l̳ technology harvested from a̳l̳i̳e̳n̳ beings and their crashed or captured spaceships which would change the world as we know it. 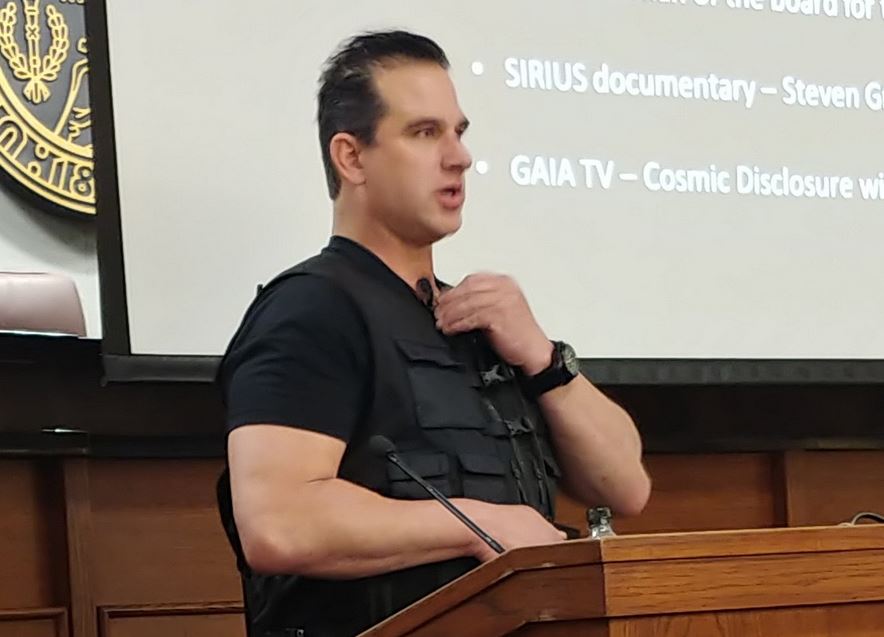 In 1990, after going through junior military programs in high school, Emery became active duty in the USAF, stationed at Lackland AFB in San Antonio, Texas. He went on to Kirtland AFB in New Mexico, where he worked on and off-base at UNM Hospital as a surgical assist and paramedic.

In a YouTube video, he makes a number of incredible revelations including that ET flying saucers are mostly “organic and linked to the driver”, they can be “infused with life and intelligence” and “change shape”.

It has been reported that Smith said he was based at an ultra-secret section of the huge Kirkland Air Force Base in New Mexico, USA.

“I’ve witnessed many different craft in these projects, I was actually working with the craft and bodies because they’re connected,” Smith claims.

“A lot of the craft are organic material which means only the driver of that race can operate the vehicle due to their frequency of the genetic DNA and the frequency that they are emitting. It’s kind of like having a pet or a car that only responds to the owner.

“These types of vehicles are so amazing, they are usually made in space through harmonics and frequency. So they can actually give life to a craft and enthuse it with artificial intelligence or consciousness, or both. And match it to the driver or occupant, of this vehicle.”

He goes on to claim to having worked on number different types of downed flying saucers, which he claims are constantly “emitting an amazing energy from space” some 30 years after being captured.

“There’s also other craft that are inter-dimensional that can change shape. So they might come in the form of light and they can manifest and change their atomic structure to become a solid so these types of craft are a little bit more advanced than the craft than we hear about on pop culture and on tv.”

Smith claims that this technology which is “thousands of years ahead” is being “suppressed” from public knowledge. And big companies are “fighting” to get their hands on the science.

The interview with Emery Smith:

He claimed: “These craft can actually go inter-dimensional, they can change shape with all of the occupants not knowing its happening and then reform again in different worlds and different dimensions, and different parts of the universe immediately.

“They have already mastered teleportation so the body can shrink within in its own living space. And that’s why they can go a million miles per hour and make a right hand turn, because they don’t feel it.

“Because they’re in their own dimensional holographic world, where they have to fall under those scientific algorithms.”

His reason for going public is that Smith claims the ET technology could completely change human life by offering free energy and groundbreaking medical cures.