In the little town of Silver Cliff, found in the Wet Mountain Valley of Colorado, ghost lights have been seen in the local cemetery for more than a century.

According to Wikipedia, the lights look like blue lantern lights or white spheres, are said to float through the cemetery and bounce on the headstones.

The lights were featured in the August 1969 National Geographic Magazine, Volume 136, No. 2. The lights can never be approached in order to gain a closer look. As soon as anyone comes too near, the lights disappear, only to pop up again in another section of the cemetery.

Cross of the Assumption has a large white cross in it that seems to glow in the bright moonlight. Each are known for being host to glowing balls of light that meander from cemetery to cemetery and wander among the gravestones.

The story of the ghost lights of Silver Cliff first reached public attention in the spring of 1956, when an article on the mystery appeared in the Wet Mountain Tribune, when some observers of the spook lights noted that the bluish colored illuminations could not be seen as clearly on the sandstone markers, many spectators became convinced that the lights were only a reflection of houselights in the valley. 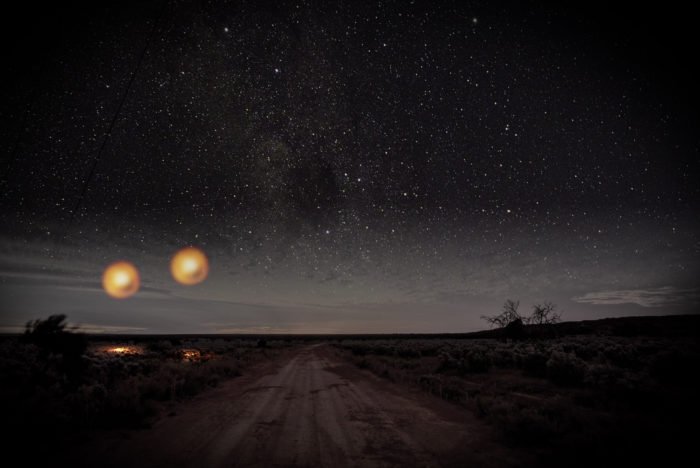 Photo for illustration purposes only

Local folklore has it that the lights were first seen by a group of miners passing by the cemetery in 1880. When the miners saw the flickering blue lights over the gravestones, they left the vicinity in a hurry.

Since then, the lights have been observed by generations of residents of Custer County. The cemetery was the final resting place for many miners who lost their lives digging for precious ores in local caverns.

According to legend, the flickering lights of the graveyard are the ever-glowing searchlights found atop the miners’ caps; the lights guide the spirits of the long-passed miners, still searching for the silver they never found.

In 1880 Silver Cliff boasted a population of 5,087; by the early twenty first century it had only a few hundred inhabitants and had almost become a ghost town. On August 20, 1967, the New York Times carried a story on the phenomena.

In the article, county judge August Menzel gives the account of the night inhabitants of both Silver Cliff and nearby Westcliff turned off all of their lights, including street lights, “but the graveyard lights still danced.”

Other rationalists have believed the Silver Cliff ghost lights to be caused by the reflections of stars. Yet the lights are just as clear on starless, moonless nights. Some have tried to prove that the lights are caused by phosphorescent ore, or glowing wood, but the darker the night, the brighter the lights.

It has also been suggested that radioactive ores cause flickering lights. Geiger counters have been employed to cover the entire area, but no radioactivity has been discovered.