Astronomers have been on the lookout for the Sun’s ‘evil’ twin ever since the 1980s, when a scientist named Richard Muller theorized about the massive extinction events occurring on earth roughly every 26 million years. Today, researchers seem closer then ever to unraveling this mystery.

Members of the scientific community are well aware of these events, and it’s widely accepted that they were caused by impacting comets and asteroids. These almost regular events, Muller proposed, were caused by none other than the Sun’s twin, dubbed Nemesis after the Greek goddess of divine retribution.

His idea became very controversial across the years, since astronomers have found no trace of the star after decades of sky surveys, that is until now. But, before going into details about the newly acquired evidence, let’s have a look at Muller’s theory.

According to him, there is another star orbiting our sun every 26 million years at a length of 1 to 3 light years from our sun. It may seem very far, but it’s not that much on a galactic scale where the closes known star – Proxima Centauri, is just 4.2 light years away from us.

When Nemesis approaches the sun on its irregular orbit, it disrupts the Ort Cloud – a conglomeration of comets, asteroids and meteors located approximately 1 light year away from the Sun, just at the edge of our solar system. As a result of the collision, these celestial bodies are sent hurtling towards the inner system.

Nemesis is described as a brown dwarf. In other words, it is a failed star, too tiny to sustain nuclear fusion, gassy, dark and hard to spot, but seemingly with an ardent desire to smack everything interfering with its path.

It’s no wonder Muller’s idea was subject to disbelief, since no one was able to spot this rogue star, nor find a similar star to orbit at such a great distance. However, a new mathematical model from UC Berkeley has unveiled just that. Even more, data suggest that almost every star is born with a companion, not excluding our sun.

The team of astronomers at Berkeley have scouted the Perseus Cloud – a stelar fabric approximately 600 light years away, to count the single and binary star systems. A total of 45 single-star systems and 19 binary-star systems were identified.

After analyzing various sets of data, they reached the conclusion that wide binary systems where two stars are further than 500 astronomical units (AU) apart, the stars were younger than 500,000 years. The rest of the stars between 5000,000 and 1 million years, all stood closer, at about 200 AU. 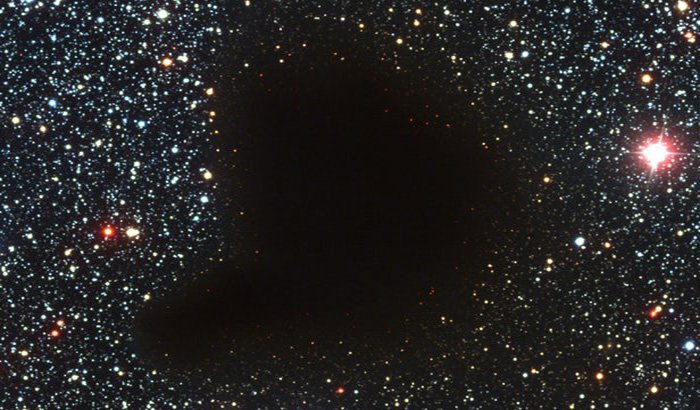 The Perseus cloud appears in the sky as a black spot, since it’s made up of dense gas and dust that blocks light from stars inside and behind it (Credit: FORS Team, 8.2-meter VLT Antu, ESO)

This survey is more than just a coincidence to researchers involved, and believe they have stumbled across a cosmic pattern.

“This has not been seen before or tested, and is super interesting,” notes Sarah Sadavoy, lead author of the study. “We don’t yet know quite what it means, but it isn’t random and must say something about the way wide binaries form.”

Craving for additional answers, the team underwent a series of computer simulations to outline several scenarios. Data showed that all stars with masses compared to that of the Sun come into existence as part of a wide binary system.

With the passing of time, around 60 percent of them break up and arrange into single-star systems, while the others approach and turn into tight binaries.

This being said, although no traces of Nemesis were found so far, the sun is likely to have a wandering evil twin that’s lurking beyond the solar system somewhere within the Milky Way.

“We are saying, yes, there probably was a Nemesis, a long time ago,” said Steven Stahler, co-author of the study.

“We ran a series of statistical models to see if we could account for the relative populations of young single stars and binaries of all separations in the Perseus molecular cloud, and the only model that could reproduce the data was one in which all stars form initially as wide binaries. These systems then either shrink or break apart within a million years.”

With the latest report from last year of disturbed objects hurtling towards the inner solar system, we can expect nemesis to arrive anytime soon, although probably not during our lifetime. But, i guess we’ll never know.

The study is available online, and will soon feature in the monthly notices of the royal astronomical society.