Five thousand years ago, a thriving community existed on an island north of Scotland. Skara Brae is a large stone-built Neolithic settlement, located on the Bay of Skaill on the west coast of Mainland, Orkney, Scotland. It consists of ten clustered houses, and was occupied from roughly 3100-2500 BC.

It was built centuries before Stonehenge or the Pyramids of Egypt were even conceived. It has been called the Pompeii of Britain as it too was buried by an natural cataclysm that preserved its secrets for millennia. Where did these people come from? Where did they go?
These questions have been asked repeatedly ever since the year 1850 when a great winter storm swept the Orkney Islands, whipping the seas into a frenzy and throwing huge clouds of sand away from the shoreline. When the storm subsided, a number of A̳n̳c̳i̳e̳n̳t̳ stone buildings were revealed. 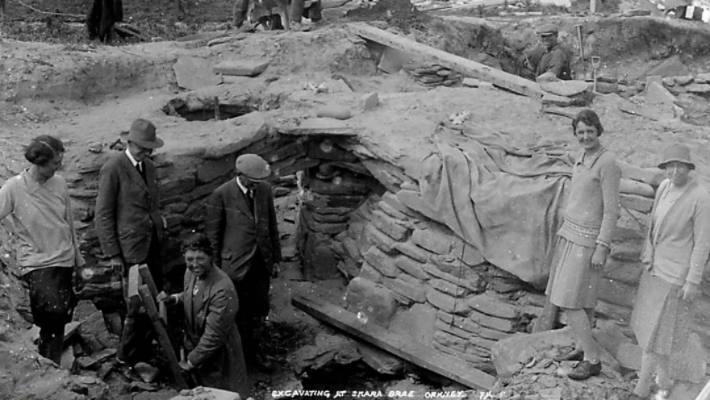 Their homes are there today, looking as if their occupants had left them yesterday. They had central heating, toilets with drains and sewers, furniture including dressers, beds and couches, water tanks and were partly sunken so as to utilize the earth for insulation.

Early examination gave no clue as to their identity or age and it was reasonably assumed that they were of Viking origin. The Orkney Islands lie about twenty miles north of the northern tip of Scotland. It is a harsh, unforgiving climate, flat and barren of trees and exposed to storms coming in from the Atlantic Ocean. As they had no wood, the people of Skara Brae were unable to build boats so their fishing was limited to offshore.

Skara Brae’s inhabitants were apparently makers and users of grooved ware, a distinctive style of pottery that appeared in northern Scotland not long before the establishment of the village. The houses used earth sheltering but, being sunk into the ground, they were built into mounds of pre-existing domestic waste known as “middens”.

Although the midden provided the houses with a small degree of stability, its most important purpose was to act as a layer of insulation against Orkney’s harsh winter climate. On average, the houses measure 40 square metres (430 sq ft) in size with a large square room containing a hearth which would have been used for heating and cooking.

Given the number of homes, it seems likely that no more than fifty people lived in Skara Brae at any given time. This also made the construction of dwellings difficult but surprisingly, the original settlers were extremely skilled in the use of stone so everything in the houses they built was of stone including beds, dressers, shelves and cupboards. The stone beds had been made comfortable with bases of heather or straw. Stone water tanks held a supply of rain water.

The houses themselves had rounded corners to deflect the strong winds, low ceilings for maximum preservation of warmth and one large wooden door, entered from street level. The houses were partly sunk in the ground to insulate them from the cold. 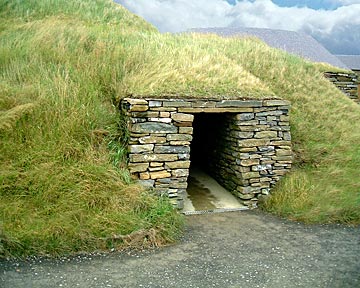 Six houses remain today and a seventh building was a workshop, indicated by flint chippings on the floor. O̳r̳i̳g̳i̳n̳a̳l̳ly, there were ten houses and they provided accommodation for over fifty people. They are all of a uniform design and all ten were spaced in a regular pattern, connected by means of underground passages.

Many have described Skara Brae as ‘a Neolithic housing estate.’ Carved designs decorate some of the wall stones and necklaces, beads, pendants and rings have been found, made from whales’ teeth. They were skilled pottery makers too and built peat kilns for firing the pots which were made in the shape of buckets and bags for carrying water though lipped pots were also found with distinctive patterns of grooves. Other painstakingly carved items are balls, probably used for games, mace heads and axes.

Traces of pumice powder have been identified which they used to polish the bone adornments. Fish and shellfish comprised most of their food. Bones have been found confirming that they ate salmon, cod, eel, haddock, bream, sturgeon, oysters, crab and shrimp.

Whales must have contributed to their foodstore too and the massive whalebones were used to form the supports for the roofs of their homes. Presumably, these were whales beached by storms, but it is remarkable that the inhabitants of Skara Brae could fashion tools that could perform such a massive task.

The whalebones supported roofs consisting of peat slabs and deer skins secured with leather ropes; the skins were also used as blankets. Several houses contain stone ‘limpet boxes’ which were used for the storage of live shellfish as bait. They knew how to preserve meat by salting and drying, and stone basins have been found that were used to grind corn and make bread. Most of this knowledge of the way the inhabitants of Skara Brae lived comes from the Middens, that can be seen today.

There are many theories as to why the people of Skara Brae left, particularly popular interpretations involve a major storm. To attempt to find the answers, paleontologists have assembled what is known of these extraordinarily intrepid adventurers. 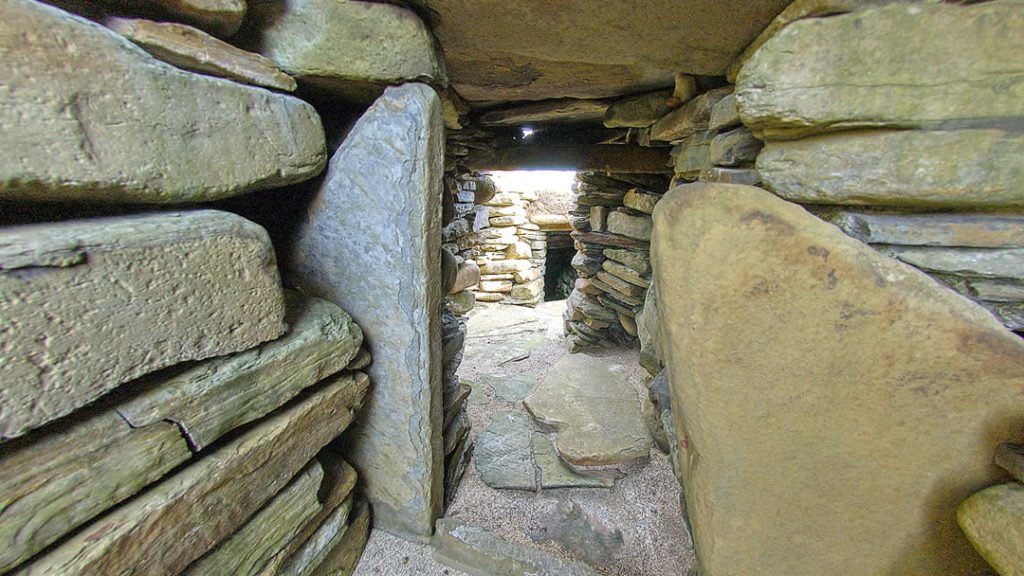 They were skilled workers in stone; that was the first fact. They were resourceful too and learned quickly to make the best use of their environment. The houses they built indicated a knowledge advanced beyond most peoples of the time. The beads and necklaces they made suggest a certain refinement and enjoyment of beautiful things, not necessarily of any practical value.

This view is enhanced by the designs they added to household items such as cooking pots and water containers. Dogs were kept as pets, another feature not common in prehistoric times. They probably had a hierarchy of power and organization to have set up a community that lasted for six hundred years.

When the storm in 1850 blew away the sand and uncovered the lost settlement of Skara Brae, there was mild interest in the archaeological community. It was in 1913 that the whole applecart was overturned. It happened that Professor Boyd Dawkins, renowned cave explorer, was visiting Lord Balfour Stewart, the owner of the site that contained Skara Brae.

He heard talk of the find and gathered some of the other house guests to join him in some digging that focused renewed attention. This continued largely due to the efforts of the Laird of Skaill, William Watt.

He had an interest in scientific matters and spent time and money on making sure that the site was protected and that as much exploration as possible was conducted by responsible individuals. This continued until 1924 when the Office of Works took over the responsibility for it and planned on opening it to the public. Later that same year, one of the frequent Atlantic storms blew mud and water into the houses and passages before they could be made available for viewing.

The Office of Works called in Professor Gordon Childe to supervise the cleaning up process. Professor Childe was the leading archaeologist of the time and gave no consideration to the possibility that Skara Brae was Neolithic.

He thought it was ‘Pictish’—the Picts were one of the A̳n̳c̳i̳e̳n̳t̳ tribes of North Britain and were absorbed by the invading Scots between the sixth and the ninth centuries A.D. Nevertheless, he was amazed at his own findings and he reluctantly began to accept the amazing evidence before him that indicated the true age of Skara Brae.

He realized that Skara Brae was a Neolithic village that had been established earlier than 3,100 B.C. and had flourished for at least six hundred years that is until 2,500 B.C. The community had then remained unnoticed for almost 4,500 years before that winter storm in 1850.

It was in the early 1970s, however, that confirmation of its age was obtained once and for all when carbon dating was proven and available. The evidence was complete—Skara Brae had been occupied since as early as five thousand years ago despite the difficulty many scholars experienced at accepting this, in view of the urbanity displayed in so many aspects of life.

This line of thinking was greatly reinforced when experts in A̳n̳c̳i̳e̳n̳t̳ languages were examining the Runic writing carved into the sides of the stone beds while attempting to fully decipher them. They reached the astonishing conclusion that the language was not Runic at all.

The Runic language was used in Northern Europe dating from about the first century A.D. so it could not have been known to the people of Skara Brae. The Runic alphabet has only 16 letters. Some of the letters or runes are letters of the alphabet as we know them but others have meanings in addition so they could be used as a sort of shorthand. 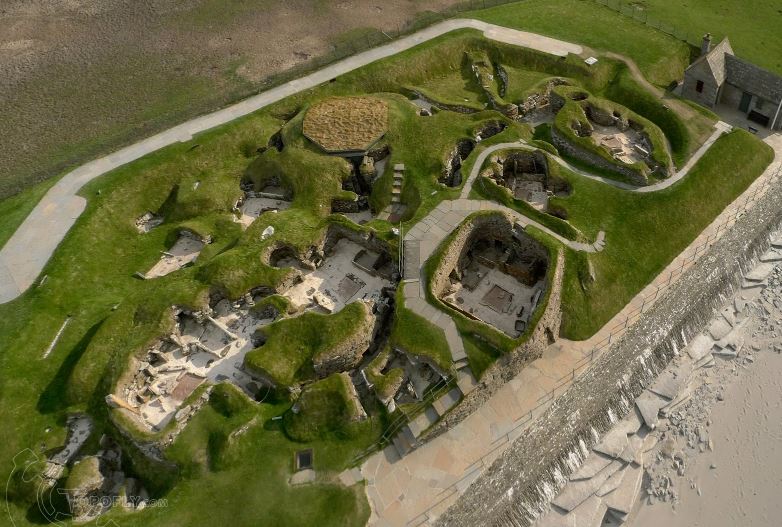 Skara Brae from above
Two examples are letters that had great meaning in those days; one meant ‘field’ and another meant ‘cattle’. The Runic language underwent several changes through the centuries but the oldest version, the one supposed to have been used in Skara Brae, would have been the one known as ‘Futhark’.

The evaluation made in 1850 when Skara Brae was first uncovered, was by scholars whose knowledge of Futhark was sketchy at best. No one questioned their conclusions and it was without a doubt their best try based on data available at the time.

In the century following, many more sites had been excavated and acquaintance with Futhark had advanced a great deal. The conclusion was irrefutable. The writings on the stone objects found in Skara Brae were NOT Futhark and not even Runic. So what was it? One new suggestion has been made and it is a hair-raising one… it has been proposed that the writings are Egyptian.

In addition, pictorials of pyramids in the Skara Brae carvings presumably have meaning. But what does that mean in relation to other data beside language? The scale and type of construction of these Neolithic buildings match those of Ancient Egypt. The plumbing, rare in the Ancient World, is also identical in the two cultures.

The grooved pottery ware found at Skara Brae is said to be identical to that in Ancient Egypt. Stone spheres found at Skara Brae have pyramids all over their surface. The corbelled walls outside the houses of Skara Brae is said to be exactly like that used in Ancient Egypt. (‘Corbelling’ is placing flat stones on top of one another so that each layer projects further out than the layer below it.)

The proponents of the belief that Skara Brae was built by people from Ancient Egypt further maintain that these were mostly priest-astronomers. Such an elitist class would have been essential in that unfriendly terrain and the hierarchy and influence they wielded in their homeland would have been necessary for survival.

These proponents also believe that many of the Skara Brae carvings have astronomical significance and relate to the lunar calendar, the nine planets in orbit around the sun, and symbolize the equinoxes and signs of the zodiac.

When Alexander the Great destroyed Heliopolis, the center of Egyptian science, he destroyed the last vestiges of Egyptian survey knowledge, so no traces of their travels can be expected to emerge. For now, Skara Brae continues to guard its secret as it has for five thousand years.