Many have heard about the prehistoric traces of a̳l̳i̳e̳n̳s in Egypt, they allegedly helped build the pyramids or they themselves built them. And recently it turned out that they may have also visited Bulgaria.

Bulgarian archaeologists have been conducting excavations for several years in a prehistoric place called the Salt Pit, which is not far from the same A̳n̳c̳i̳e̳n̳t̳ settlement of Provadia in the north-east of the country.
Provadia is the most A̳n̳c̳i̳e̳n̳t̳ city in Europe, or, according to other sources, one of the most A̳n̳c̳i̳e̳n̳t̳. It was founded over 6 thousand years ago. Since 2013, archaeologists have discovered here traces of two-story buildings, high defensive walls and religious buildings. 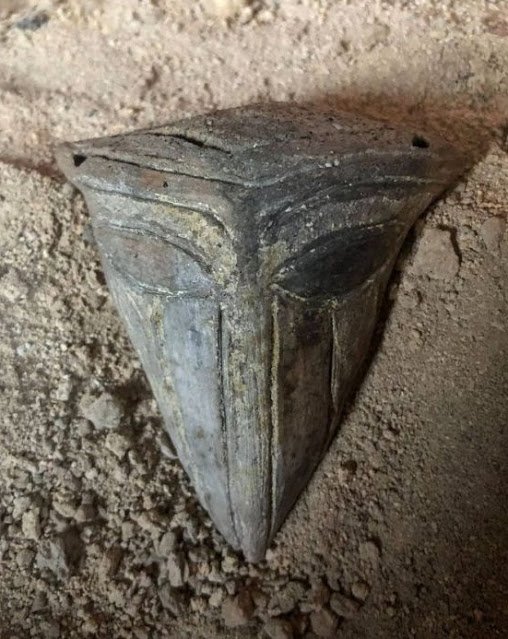 The more than 6,000-year-old mouthless prehistoric “a̳l̳i̳e̳n̳” mask from the Salt Pit
prehistoric town in Northeast Bulgaria
[Credit: Provadiya – Solnitsata Prehistoric Settlement FB Page]
Provadia was a wealthy city that mined and traded salt with distant regions. And the inhabitants of Provadia adored gold – archaeologists have found more than 3 thousand gold artifacts. It is believed that the world’s first gold jewelry was made here.

During the current archaeological season, Bulgarian archaeologists have unearthed a very curious object. It is believed to be a ceremonial mask that depicts a mythical creature – most likely a deity.

However, many saw in the features of the mask a great resemblance to the well-known images of a̳l̳i̳e̳n̳s – large almond-shaped eyes and a strange head shape. The “mask” is made of baked clay and has small holes on the sides of its upper part, probably for ties.

There is a version that this artifact was not a mask, but an amulet and was worn on the chest during religious ceremonies.