One of the most unique U̳F̳O̳ encounters from the 1980s occurred on the Nullabor Plain, in a remote area of Australia.

On January 20, 1988, the Knowles family, including Fay Knowles and her three sons, Patrick (24), Sean (21), and Wayne (18) and their two dogs, drove along a desolate road at around 4:00 a.m when a bright light object was seen ahead of them.
At about 20 metres from the object, the family say they were confronted with a white blinding light that moved along in front of their moving vehicle. At first they thought it was a large truck, but as they approached, it was about 1 metre wide and described as a slightly angular egg in an egg-cup shape with a yellow centre. 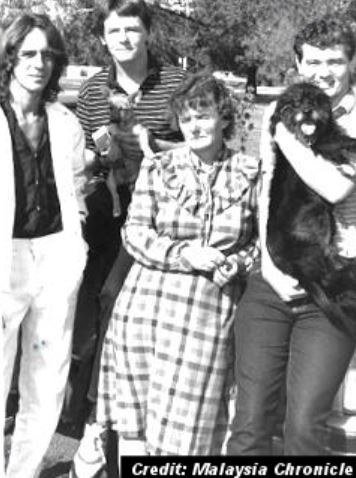 The Knowles Family
The object, which at first appeared to be either on the ground or immediately above it then began to move back and forth. Sean swerved the car to the opposite side of the road to avoid a collision with the object, but then nearly collided with a station wagon towing a caravan coming in the other direction. As the Knowles family drove by, the strange object started to pace their car. Then it started to maneuver around the car.

At one point, the object seemed to leave, but then suddenly, the unthinkable happened. The object returned and actually landed on top of the car. The family heard a loud clunking noise and felt the car shake. Suddenly, the entire vehicle was lifted up off the road.

Mrs. Knowles reached out her window and touched the object, which she said felt “spongy and rubbery.” She pulled her hand back in, and it was covered with strange black dust. Suddenly, the entire car filled with the black dust. At the same time, a high-pitched sound was then heard, which sent the dogs into a frenzy.

The family became disoriented and felt that their voices had become slower, and lower in pitch. They believed at this point that they were going to die. Patrick said that he felt that his ‘brain was being sucked out’, and Mrs Knowles likened it to having something ‘going into our heads’. 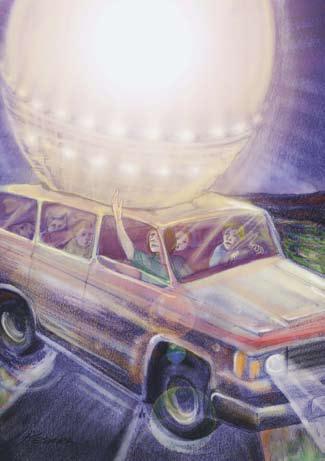 A while later, the family felt the car forced back down onto the road, bursting the rear right tyre. Sean brought the car to a sudden stop and then blacked out. The family left the car hurriedly and hid in some bushes by the side of the road. Meanwhile, the U̳F̳O̳ remained above the car for a few moments and then darted away. They remained there for 15 minutes before changing the tyre and continuing on to the nearest town.

Unknown to the Knowles, a trucker just a few miles down the highway also observed the strange object as it sent down what appeared to be beams of white light. The Knowles family was extremely traumatized and the police were notified.

Faye Knowles, a mother of three, also told police that her speech and that of her sons changed during the encounter along the highway.

Police dismissed any suggestion of a hoax.

″We were a little bit skeptical at first,″ said Sgt. Jim Furnell of Ceduna Police in the state of South Australia. ″But after investigating, we are treating the reports very seriously.″

She told police she was driving through the Nullabor Plain from Perth in Western Australia when she first saw a glowing object in her rear window at 2:45 a.m. Wednesday 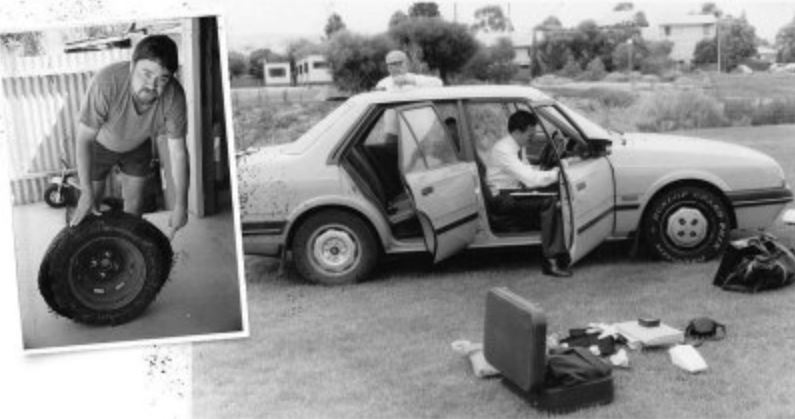 Police investigate the car
″It apparently picked the car up off the road, shook it quite violently and forced the car back with such pressure that one of the tires was blown,″ Furnell said.

″While this was happening the family said their voices were distorted and it was as if they were talking in slow motion.″

The crew of a tuna boat 50 miles away also said they were buzzed by an unidentified flying object minutes later, and that their voices become unintelligible as a result.

Police said the crew of the tuna boat could not have known about the Knowles’ experience when they reported a U̳F̳O̳ sighting in the Great Australia Bight, a body of water off the Australian coast.

Somehow the media heard about the sensational case and the Knowles became overnight, reluctant celebrities. Despite the physical evidence of their encounter (including strange indentations on the roof of their vehicle and the weird black dust), the family was ridiculed intensely in the press.

Although they never backed down or changed their story, they later said that they regretted coming forward because of how they were treated.