Juba II was the monarch of a North African kingdom known as Mauretania, comprising most of modern Morocco and western Algeria. After Emperor Caligula murdered his son in A.D. 39, the Romans invaded Mauretania to seize his golden fortune. But they never found it.

Nearly 2,000 years later, a buried treasure surrounded by Roman-era artifacts came to light in the American Midwest. Could this apparently A̳n̳c̳i̳e̳n̳t̳ trove have been the lost exchequer of King Juba, concealed nearly fifteen centuries before Columbus landed on America continent?
In the extreme northeast corner of Richland County, in southern Illinois, bends an elbow of the River Embarras, branching from its bigger sister, the Wabash. An infrequently visited site, certainly unknown outside its immediate vicinity, was hardly more than a hole in the ground. 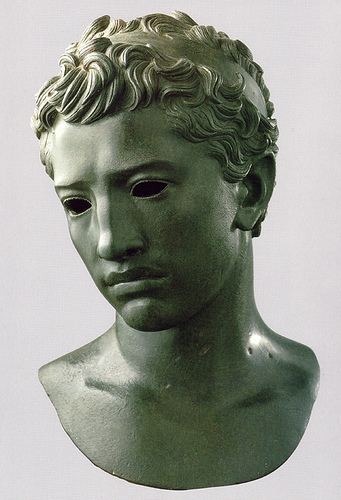 King Juba II
But the opening, about ten feet wide and eight feet from ceiling to roof, was large enough for infrequent local visitors to stoop through a kind of natural corridor running about 15 feet into the side of a hill perhaps three-quarters of a mile from the south bank of the Embarras.

On April 2, 1982, a 47-year-old “caver” entered its dark recesses outfitted with flashlight, pick-hammer and knapsack. Nineteen years later, Russell Burrows publicly presented a detailed description of the events of April 2 before an international archaeology conference in the Vienna Art Center, Austria.

“The cave itself is 535 feet deep to its terminal breakdown,” he said. The down-angle is six degrees. The artifacts which he recovered were located in the silt on the most part. However, some were recovered from niches and shelves along the walls. Also to be seen are lamps cut out of knobs of rock on the walls.

There are several of these lamps, since they seem to be positioned every fifteen or twenty feet. The area above these lamps is blackened by smoke from the lamps, which most likely burned animal fat or oil of some kind.

In the largest area of the cave are five statues made of the same black material as are the artifacts displayed here. These statues are arranged in a semi-circle, and they are in appearance on the order of Egyptian figures: the left foot forward and the left arm forward. Held in the left hand is a staff. Since these statues are some eight or more feet tall, and are made of the black material, their weight to be four to six tons.

There are thirteen doorways cut into the walls of the cave. These doorways are closed by cut and well-fitted blocks of stone, the seams of which are sealed with a pitch or bees’ wax. Russell removed one of the blocks and was amazed to discover that the sealed doorways were the entrance into a burial crypt, which was about twelve feet square, with a stone bier in the center.

In this crypt, he found the skeleton of a male; this was determined by the pelvic bone. On his skeleton was copper, gold and jewels, and lying on the bier with him was his sword, ax and shield. There was, and still are, large jars, one of which has fallen and broken. Inside the broken jar was to be seen twenty or so rolled-up scrolls. 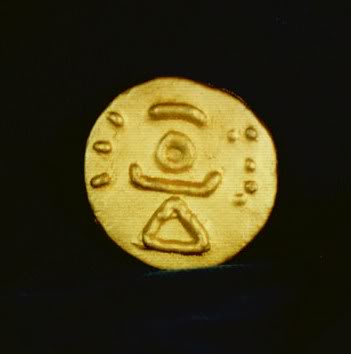 Burrows Gold Coin
The Burrows cave site in southern Illinois reveals that tens of thousands of refugees sailing from the murder of their king and the invasion of their homeland preceded him by nearly fifteen centuries.

It started with Cleopatra, whose daughter was made queen of the semi-independent realm of Mauretania, present-day Morocco, which she ruled with her husband, King Juba II.

Following the execution of their son, Ptolemy, by Emperor Caligula, the Mauretanians rebelled against their Roman overlords and made their way into what is now Ghana. There they constructed a fleet of ships for a transatlantic voyage to a land where they hoped to rebuild their kingdom safe from Roman rule.

Preferring a perilous transatlantic adventure to slaughter and slavery on land, they entrusted their lives to the sea. Faced with almost certain de̳a̳t̳h̳ at home or escaping over the uncertain open sea, some of its survivors became First Century “boat-people.”

While the majority of professional archaeologists dismiss such transatlantic voyages as imaginative fantasy, they are contradicted by the vast collection of inscribed and illustrated stone tablets uncovered from the Burrows cave. The cave containing this treasuretrove of artifacts associated with King Juba, the Mauretanian king, is still a closely guarded secret.

Even now, however, its discoverers are in the process of disclosing its whereabouts and paradigm-shattering contents to the outside world. When that disclosure is finally made, its ramifications could push the beginnings of American history back another fifteen centuries.