The great H. P. Lovecraft, achieved early fame with his 1921 story, The Nameless City. It tells the story of Abdul Alhazarad, an Arab scholar whose quest for the secrets of black magic led him into a remote, forbidding area of the Sahara Desert.

There, he stumbled upon an A̳n̳c̳i̳e̳n̳t̳ city unknown to the outside world, a center for sorcery and witchcraft, inhabited by djinni and afreets, the ghouls and demons of Semitic folklore.
Passing through the dark streets and among the lofty columns of Iram, as the gloomy city was known to its residents, he entered the temple of their patron deity, Cthulhu, a satanic figure. The high priest in attendance entrusted him with a thaumaturgic tome, the Al Azif.

But translating its horrific text into Latin as the Necronomicon proved too much for Abdul, and he went raving mad before completing his task. While most readers assume The Nameless City was an entirely original creation of Lovecraft’s fertile imagination, he actually based it on A̳n̳c̳i̳e̳n̳t̳ Arab oral accounts.

Bedouin myth described “Iram of the Pillars” (Iramu dat al-`imad) as a large, deeply prehistoric metropolis built after the great flood by a race of giants, the Ahd-al-Jann, in an uninhabitable area of the Arabian Peninsula known as the Rub-el-Khali, or “Empty Quarter.”

The city was said to have been a headquarters for the muqarribun, “Ghost Priests” of a profane, pre-Islamic cult. They worshiped Khadhulu (Lovecraft’s Cthulhu), mentioned as a devilish conception in the fragmentary Al-Khaddif manuscript, which became the short story author’s Al Azif.

Iram was also uncommonly rich, thanks in large measure to its trade in al-luban— “the milk”—an aromatic resin taken from the bark of bosellia trees for the production of costly perfumes sought after by wealthy clients, and used in sacred rituals. Prized by the A̳n̳c̳i̳e̳n̳t̳ Romans as olibanum for temple ceremonies, the substance was reintroduced sometime thereafter by the Franks, from which its modern name, frankincense, derived. 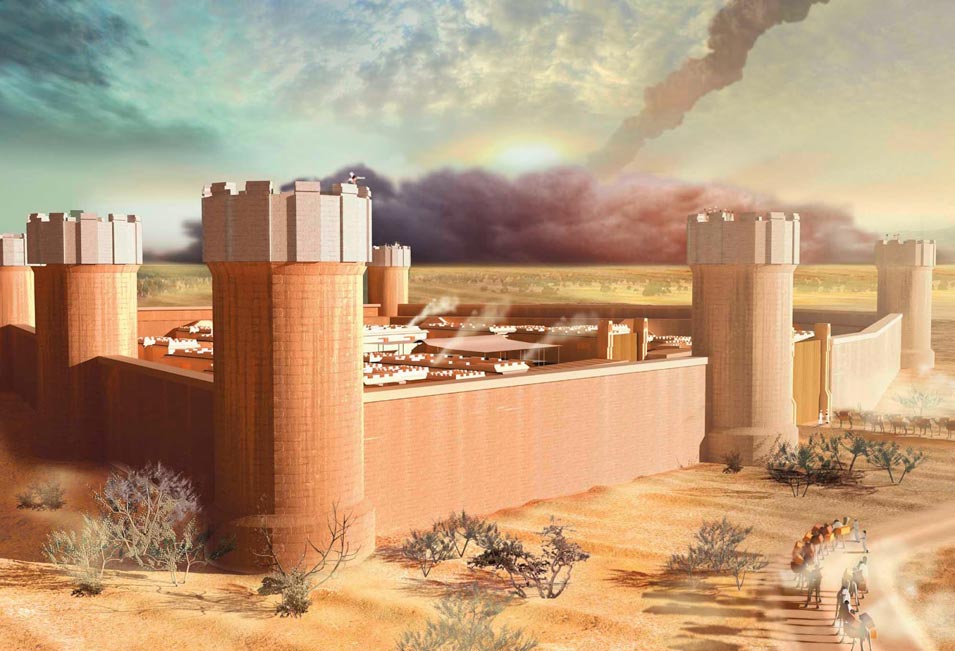 From early medieval times, it was an integral part of Christian church services in large measure because al-luban had always been associated with the banishment of evil influences.

But its alleged purgative powers were inadequate to rid Iram of its muqarribun, djinni and afreets, even after Hud, a virtuous prophet, had been sent by God to convert the residents from their wicked ways.

As punishment, Allah afflicted them with a horrible drought, then caused a disastrous sandstorm to engulf the entire city. When the catastrophic whirlwind passed, the formerly splendid urban center had vanished without a trace beneath the sands of the empty quarter. The sinful city was supposed to have been swallowed whole by the desert.

The Holy Qur’an mentions a certain city by the name of Iram (a city of pillars) which was apparently not known in A̳n̳c̳i̳e̳n̳t̳ history and non-existent as far as historians were concerned [Qur’an: Al-Fajr (The Dawn) 89:6-13], 6: Have you not considered how your Lord dealt with ‘Aad – 7: [With] Iram – who had lofty pillars, 8: The likes of whom had never been created in the land? 9: And [with] Thamud, who carved out the rocks in the valley? 10: And [with] Pharaoh, owner of the stakes? – 11: [All of] whom oppressed within the lands 12: And increased therein the corruption. 13: So your Lord poured upon them a scourge of punishment.

In 1968, however, the mists of legend began to coalesce into archaeological reality when Paolo Matthiae and his colleagues from the University of Rome La Sapienza, digging at an unidentified site at Tell Mardikh, in Syria, less than 35 miles southwest of Aleppo, excavated a statue dedicated to the Babylonian goddess Ishtar.

The city was discovered to be 4,300 years old. Its base was inscribed with the words, “Ibbit-Lim, King of Ebla,” a city that had vanished no less thoroughly than Iram. Ebla, though, had been known to exist, because it was occasionally cited by dynastic Egyptian and Akkadian bureaucrats.

Ebla was itself destroyed in 2240 B.C., when Sarru-kinu, Sargon of Akkad, overthrew Sumerian civilization. The city was thereafter reoccupied by a Semitic people, the Amorites, who restored enough former prosperity to make it the target of another conqueror, the Hittite king, Mursili I, in 1600 B.C.

His attack represented a de̳a̳t̳h̳blow from which Ebla never recovered, lingering on as a small village until the 7th century A.D., when its ruins were finally abandoned and covered by the sands of time. But during exhaustive examination of the Tell Mardikh tablets, archaeologists were surprised to find documentation of the “legendary” Iram, which the Elbaites clearly knew as a real place where they engaged in trade for many years.

They referred to it as Iruma, the “City of Towers,” which subsequent traditions garbled as “Pillars.” Iruma or Iram was actually a title bestowed on the city, just as New York is today known as “The Big Apple,” or Chicago is called “The Windy City.” The lost city’s real name was Ubar, or “Ubar of the High Towers. 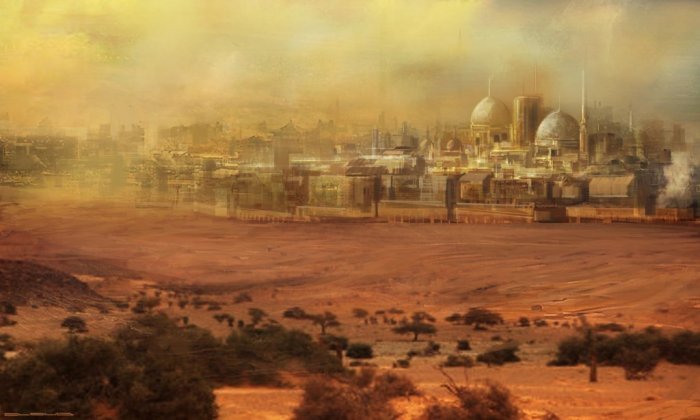 The Ebla inscriptions also refer to Iruma-Ubar as a cult capital where all the profane arts of black magic and thaumaturgy flourished, just as portrayed in Bedouin myth.

In the early 1980s a group of researchers interested in the history of Iram used NASA remote sensing satellites, ground penetrating radar, Landsat program data and images taken from the Space Shuttle Challenger as well as SPOT data to identify old camel train routes and points where they converged.

These roads were used as frankincense trade routes around 2800 BC to 100 BC. One area in the Dhofar province of Oman was identified as a possible location for an outpost of the lost civilization.

Subsequent digs near the Ash Shisar oasis, amid ruins previously identified as a 16th century Shis’r fort, soon unearthed Iram-Ubar. The excavated city showed every sign of fabulous wealth, resulting from extensive trade between the coastal regions and population centers of the Middle East, where it was a commercial center between Asia and Europe.

Copious amounts of frankincense, the fragrant resin associated with stories of Iram, were discovered at the site, the remnants of which likewise disclosed the nature of its disappearance. This older fort was found to have been built on top of a large limestone cavern which would have served as the water source for the fort, making it an important oasis on the trade route to Iram.

As the residents of the fort consumed the water from underground, the water table fell, leaving the limestone roof and walls of the cavern dry. Without the support of the water, the cavern would have been in danger of collapse, and it seems to have done so some time between 300-500 AD, destroying the oasis and covering over the water source. Four subsequent excavations were conducted by Dr. Juris Zarins, tracing the historical presence by the people of ‘Ad, the assumed ancestral builders of Iram.

If, as Arabic myth relates, the Ahd-al-Jann (‘Ad) built Iram five generations following the flood, that would place its construction around 2975 B.C. Again, this date coincides remarkably well with organic materials retrieved from Ubar, where carbon dating analysis established the city’s completion shortly after the turn of the 3rd millennium B.C.

The Ahd-al-Jann builders were themselves described in Bedouin folkfolklore as a tribe of the Adites, remarkably skilled architects and builders who raised great stone monuments. Even today, rural Saudi Arabian tribes refer to any A̳n̳c̳i̳e̳n̳t̳ ruins of prodigious size as buildings of the Adites.

The Adites are regarded as the earliest inhabitants of Arabia, and referred to as red men, for the light color of their hair. Several accounts of Atlantis (Egyptian, Irish, Winnebago, etc.), depict the Atlanteans, at least in part, as redheads.

It would appear, then, that fifth generation survivors from one of several natural catastrophes that devastated the kingdom of Atlantis fifty centuries ago built Iram-Ubar in what is today the Dhofar Province of southern Oman. It grew to become one of history’s longest-lived cities, flourishing for some 3,500 years, until it suffered a fatal disaster different from, yet strangely parallel to, the far more potent cataclysm that overwhelmed the Atlantis of its founding fathers’ ancestors.