In 1860, Henri Mouhot, a French naturalist had gone to Indo-C̳h̳i̳n̳a̳ in search of rare birds and insects. He didn’t find rare birds or insects but found monumental highways, artificial waterways, and magnificently constructed towers.

These he realized were not ordinary buildings but were the remnants of a splendid civilization. Unfortunately, Mouhot fell sick and died of tropical fever. His reports were passed on to others. And all the details arrived at one conclusion – that there occurred a brilliant civilization.
The minute details were later on discovered by the French government who set up an Exploration Commission. By 1885 they had worked up a chronology of the rulers and developed the outlines of a description of the civilization that had produced the wondrous city. 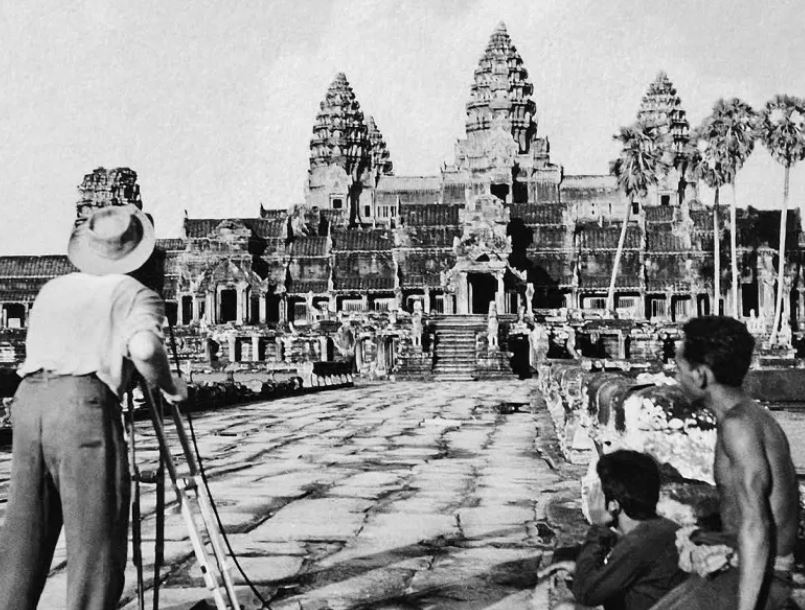 They could document that Angkor had been constructed by a south-east Asian people, called Khmers. They developed militarily and technologically for 500 years. But the question which historians could not answer was why these A̳n̳c̳i̳e̳n̳t̳ peoples suddenly chose to abandon settlements that they labored so hard to build?

The civilization began with the trade and other contracts between India and South East Asia. It took spiritual inspiration from India. And after a few years modern Kampuchea was formed. It was called Phnom or Funan which meant ‘mountain’.

The founder of the Funan, according to the Khmer tales was Kaundinya, a Brahman. He came to the shore where a young woman paddled out in her canoe to greet him. She was Queen Willow Leaf, ruler of the country and daughter of a serpent deity. She was against Kaundinya, so she seized his ship.

But Kaundinya proved to be more powerful. He shot a magic arrow into her craft. The queen realized that she was no match for him. So she made peace with him and shortly afterwards the two married. And from their union were born the ancestors of Funan rulers and generations of Khmer rulers. 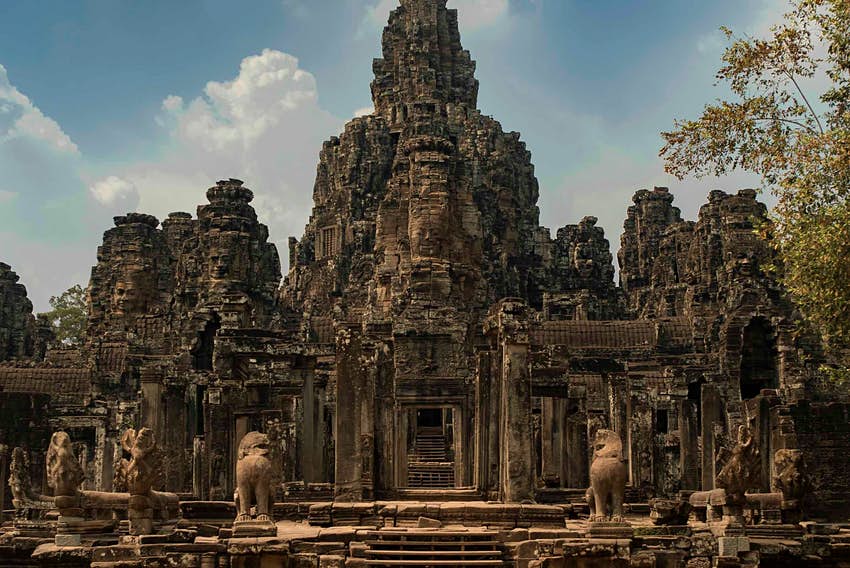 The kingdom progressed for five centuries and then around 550 A.D., the Funan Kingdom was overthrown by Jayavarman II. With him started the brilliant Khmer empire and a royal dynasty. This dynasty flourished for more than 600 years. Jayavarman, meaning ‘protector of victory’, was a military genius.

He ruled for 48 years and unified the state and kept the state militarily strong. He set up a new capital on the mountain of Kulen. There he brought an Indian ‘skilled in magic science’ to exorcise all foreign demons and to establish the protection of his empire by Lord Siva.

And to make his position all-powerful, he declared himself as the God-king – the incarnation of Siva. The concept provided the mantle of legitimacy for 30 Khmer kings. It also became the inspirating force behind the feverish buildings which created the urban complex on and above the plain of Angkor.

The civilization of Angkor was unique as it was a mixture of two influences—Indian and Javanese. It was built with sandstone and laterite, the rectangular structure (2,800 by 3,800 feet) faces west, in Hindu belief the direction taken by the dead when going to their next life.

Jayavarman created a hereditary office of high priest to assist in the task of administration. With him, Jayavarman established a religious hierarchy to supervise every aspect of national life. Jayavarman was followed by his nephew Indravarman I.

He ruled for 11 years and solidified his empire by building barrages and raised water storage lakes. With the facility of storage water, the condition of peasants improved.

They could irrigate their land throughout the year. Indravarman’s son and successor, Yasovarman I, also did much for the good of the kingdom. He constructed a funerary temple in the middle of a lake. He also created a stone pyramid and a barrage to the east of the royal city nearly 5 square miles in size.

Thus the construction work continued from generation to generation and the empire continued to prosper. Yasovarman was followed by Suryavarman who kept the torch of progress burning. 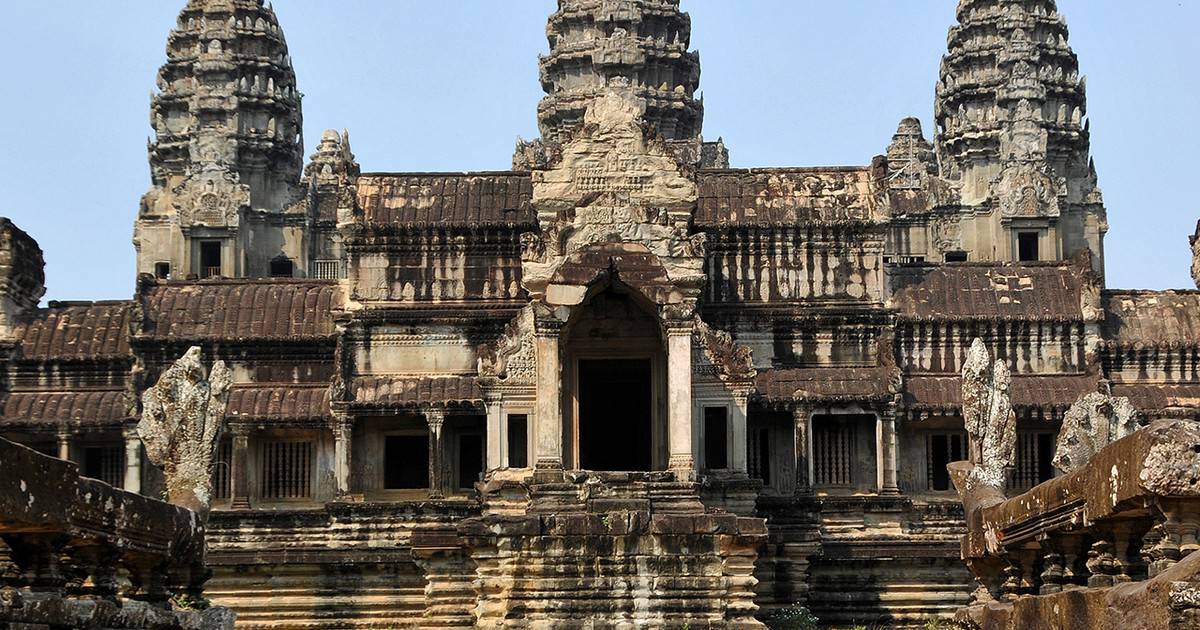 Between 900 and 1200 Angkor achieved great prominence because of the rise of impressive temples in Angkor, including the famous temple that became known as Angkor Wat. It was built in the 12th century during the reign of Suryavarman II who ordered it to be built.

Suryavarman II, dubbed one of the greatest Khmer kings, was a warrior-king and launched many attacks on the Dai Viet, which was highly resilient and resisted subjugation. Suryavarman had gained the throne through the violent means of killing his great uncle, King Dharanindravarman.

The architecture of Angkor Wat is in classical Khmer style. It was also a temple-mountain surrounded by a wide moat, crossed by a causeway on the east side. The state temple was dedicated to Vishnu, whom Suryavarman II considered the Protector of the Khmer empire, a departure from earlier rulers, who regarded Shiva as the protector of their kingdom.

Five huge beehive-like towers dominate the skyline at Angkor Wat, while the long causeways and wide pools give a sense of freedom in space. This temple is considered the best example of Khmer architecture at its most refined state. Composing a half-square mile (200 hectares), Angkor Wat uses its massive proportions to astonish any visitor.

Similar to large-scale monuments in Egypt, there is a long approach to the temple, an imposing entry foyer, followed by a center temple rising pyramid-like on three superimposed terraces. The external appearance resembles descriptions of Mount Vaikuntha, home of Vishnu.

But after his de̳a̳t̳h̳, the Khmer empire entered a period of decline, primarily because there was no direct heir. The struggle for throne began. Jayavarman VII, (brother of the dead king) who was in exile came and took the reigns of the state into his hands. He gave new light to the kingdom—architecturally and politically. He built temples in memory of his parents—To Prohm and Preadh Khan. He also polished and completed the Earlier unfinished temples. He dedicated a temple to himself and the Buddha, called the Bayon.

The Bayon represented changes in architectural construction. Compared with earlier temples, this temple is cluttered and its 51 towers make the profile difficult to understand. More unique and unusual is the sculpture with huge smiling faces, which is a representation of Jayavarman VII in the aspects of Buddha.

He died in 1219 and from the 13th century onward, no Khmer king undertook the construction something like that of Jayavarman VII. In addition to weak kings, many social and economic factors contributed in weakening the empire.

With the weakening process already started in the 13th century, darkness finally engulfed the whole civilization in the 15th century. The city fell to the Siamese. The end came about in seven months and Siamese returned with much loot and plunder. Siamese returned next year. But by that time the entire city was deserted.

There was no trace that civilization ever flourished in the jungles of Angkor. Where did the people disappear? Why didn’t the people with such a splendid civilization and culture fight back? These are some of the questions which are still inviting the attention of the archaeologists and historians to carry out more research.