As we already know that Atlantis was the first global civilization. There has not been one since, including our own which, for all of its attempts at internationalism, is fractured everywhere.

The early Classical Greek historian, Hesiod, wrote of an oicumene, or a world-power (from which our word, “ecumenical,” derives) that dominated a Golden Age of universal magnificence and sun-worship.
Its movers and shakers were pyramid-builders, who erected their singular structures from the Atlantic isles eastward to Egypt and Sumer, and westward to the Americas. 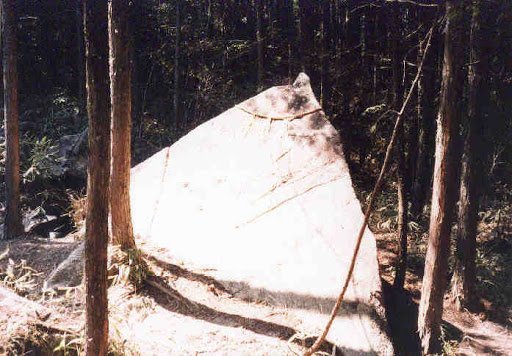 One of the pyramids of Mount Kasagi
But far less well-known are the pyramids of Mount Kasagi in Japan. They are possibly surviving testimony to the same Atlantean civilizers who roamed the planet. Standing about seven feet tall and some fourteen feet across at the base, it is a powerful work of art, starkly commanding. Who sculpted it, when, and for what purpose, no one knows.

The hilly, thickly forested and surprisingly under-populated countryside outside the big city of Nagoya, in north-central Japan, is little known to outsiders, even to many Japanese.

Practically concealed amid the abundant plant-life of the forest floor is an almost perfectly symmetrical stone pyramid on the slope of Mount Kasagi. It has been precisely crafted from a single massive block of solid granite weighing an estimated nine tons, although the surface is unadorned by markings of any kind.

No equivalent stone may be found in the immediate vicinity, so moving the heavy block to its location on the slope of a mountain required transportation skills on a par with its carving. Not only the surrounding heavy vegetation, but the structure’s position in a valley demonstrate it was never intended for astronomical purposes.

No burials have been associated with this “trigonon,” as it is referred to by Professor Nobuhiro Yoshida, President of the Japan Petroglyph Society (Kitakyushu). He is one among many Japanese scholars who have studied the structure, although its existence is virtually unknown in the West. Folk tradition among the local peasantry, however, describes a white snake that dwells under and within the Mount Kasagi pyramid.

In a prehistoric ritual still annually performed by pious residents, they leave an offering of eggs as a ceremonial feast for the serpentine genius loci, or “spirit of the place.”

Mythic relationship between a sacred snake and egg symbolism does not occur elsewhere in Japan, or the rest of Asia. But it is known on the other side of the world from Japan in the Nile Valley as Kneph, the serpent manifestation of Khnemu. 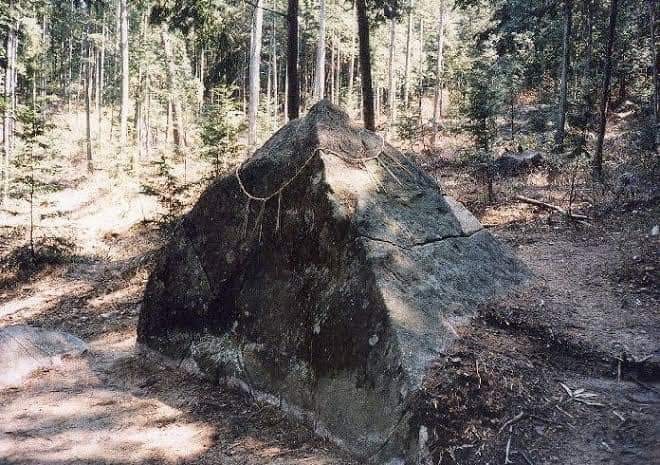 His serpent power (Kneph) appears to be the Egyptian version of Benten, the goddess of Mount Kasagi’s “trigonon,” because her myth describes her as the Lady of the White Serpents, and tells of her A̳n̳c̳i̳e̳n̳t̳ arrival in Japan from over the sea. Interestingly, displayed at her Tokyo shrine at Shirorama are stone and bronze images of a pyramid, her emblem.

More than phonetically, Benten appears related to the Benben, an Egyptian phoenix-like bird of immortality, likewise associated with a sacred egg. Benben was the name and personification of the pyramidian, incorrectly referred to as a pyramid “capstone” of the Great Pyramid. A Benten-Benben relationship seems too close to be circumstantial.

Japanese-Egyptian comparisons grow even closer when we learn that the apex angle of the “trigonon”—76 degrees—is identical to that of the Great Pyramid. The obscure pyramidian is not alone. Four other similarly cut stone structures are spaced every 100 meters, three of them forming a triangular pattern along Mount Kasagi’s ridge. Their immediate vicinity is uncommonly rich in prehistoric rock art, indicating that this remote and almost inaccessible area was important to the pyramid-builders.

While no other “trigonons” have been found, a scene reminiscent of Atlantis itself may be found at Atami-san. Mount Atami, on the northeastern coast of Japan’s Izuhanto, the Izu Peninsula (Shizuoka Prefecture ken, Honshu), facing Sagami-nada (the Gulf of Sagami), is an enormous but extinct volcano, the A̳n̳c̳i̳e̳n̳t̳ source from which the city of Atami, built within the crater, derives its name.

Almost half-sunk into the sea, Atami-san presents a discernably Atlantean appearance. Atami was an important resort as early as the 5th century, A.D., although Neolithic finds in the crater prove the site has been occupied from more deeply prehistoric times, when the name originated. “Atami,” a possible Atlantean linguistic survivor, has no meaning in the Japanese language.