Athanasius Kircher was a German polymath of the 17th century and also one of the scholars to seriously investigate the Atlantis legend. Initially skeptical, he cautiously began reconsidering its credibility while assembling mythic traditions of numerous cultures in various parts of the world about a great flood.

His research led him to the immense collection of source materials at the Vatican Library, where, as Europe’s foremost scholar, its formidable resources were at his disposal. It was here that he discovered a single piece of evidence which proved to him that the legend of Atlantis was actually fact.
Athanasius Kircher, was born on 2 May in either 1601 or 1602 in Geisa, Buchonia, near Fulda, currently Hesse, Germany, this Jesuit priest was also a pioneering mathematician, physicist, chemist, linguist, and archaeologist; the first to study phosphorescence; inventor of, among numerous futuristic innovations, the slide projector and a prototype of the microscope. 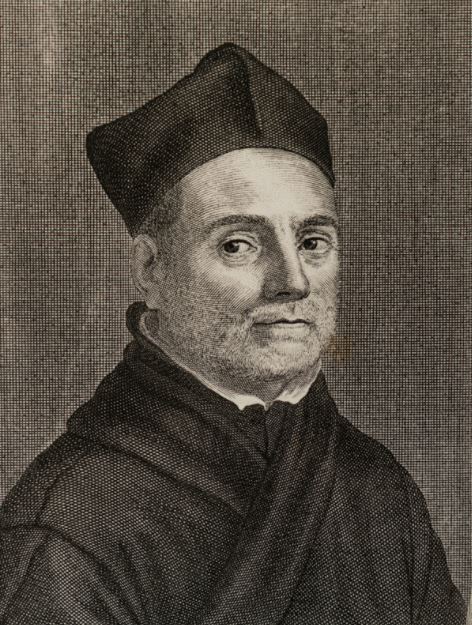 Athanasius Kircher
The founding father of scientific Egyptology, he was the first serious investigation of temple hieroglyphs.

In 1665 Kircher found a well-preserved, treated-leather map purporting to show the configuration and location of Atlantis among the relatively few surviving documents from Imperial Rome in Vatican Library. The map was not Roman, but brought in the first century A.D. to Italy from Egypt, where it had been executed.

It survived the demise of Classical Times, and found its way into the Vatican Library. Kircher copied it precisely, adding only a visual reference to the New World, and published it in his book, Mundus Subterraneus: The Subterranean World, in 1665.

His caption states it is “a map of the island of Atlantis originally made in Egypt after Plato’s description,” which suggests it was created sometime following the 4th century B.C., perhaps by a Greek mapmaker attached to the Ptolemies.

More probably, the map’s first home was the Great Library of Alexandria, where numerous books and references to Atlantis were lost, along with another millionplus volumes, when the institution was burned by religious fanatics. In relocating to Rome, the map escaped that destruction.

Similar to modern conclusions forced by current understanding of geology in the Mid-Atlantic Ridge, Kircher’s map depicts Atlantis, not as a continent, but an island about the size of Spain and France combined. 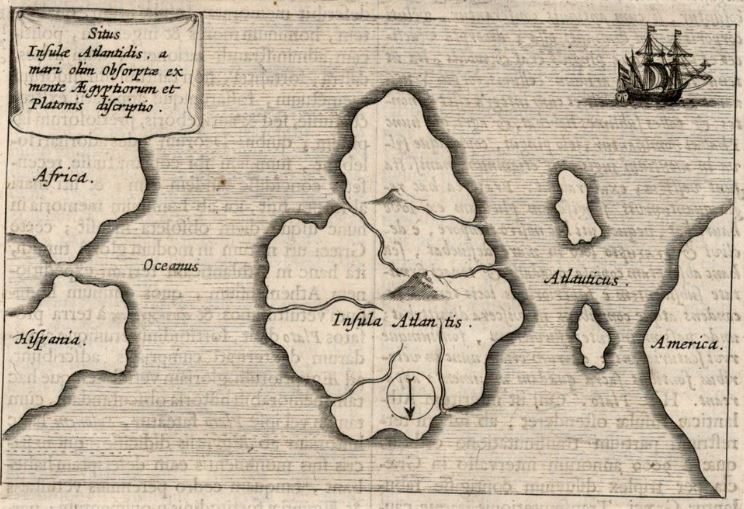 thanasius Kircher’s map of Atlantis. The map is oriented with south at the top.
It shows a large, centrally located volcano, most likely meant to represent Mount Atlas, together with six major rivers, something Plato does not mention. Kritias describes large rivers on the island of Atlantis, but does not indicate how many.

Although the map vanished after Kircher’s de̳a̳t̳h̳ in 1680, it was the only known representation of Atlantis to have survived the Ancient World. Thanks to his research and book, it survives today in a close copy.

Kircher was the first to publish a map of Atlantis, probably the most accurate of its kind to date. Curiously, it is depicted upside down, contrary to maps in both his day and ours.

Yet, this apparent anomaly is proof of the map’s authenticity, because Egyptian mapmakers, even as late as Ptolemaic times, designed their maps with the Upper Nile Valley located in the south (“Upper” refers to its higher elevation) at the top, because the river’s headwaters are located in the Sudan.