In the third century B.C. the Greek mathematician Archimedes laid down many of the principles which still guide engineering science today and created, perhaps, highly advanced and innovative military technologies which have been lost to history.

There are several famous stories from A̳n̳c̳i̳e̳n̳t̳ literature that speak of giant lenses or mirrors that were used in battle.
The most interesting of these stories is that of the Greeks using a fearsome ‘Solar Mirror’ or also known as ‘Burning Mirror,’ which Archimedes had cooked up in Syracuse in 212-215 B.C., to incinerate the invading Roman naval fleet.

He allegedly focused this giant solar mirror on the ships of the Roman fleet and set them on fire. Archimedes was credited with the naval victory, though the Romans eventually got the better of the Greeks in the long run.

In the words of Polybius, ‘the Romans … had every hope of capturing the city immediately if only one old man out of all the Syracusans could have been removed; but so long as he was present they did not dare even to attempt an attack …’ Beaten back with heavy losses, the Romans were forced to abandon their assault.

Instead, they opted to starve the city into submission, and launched an eight-month siege. 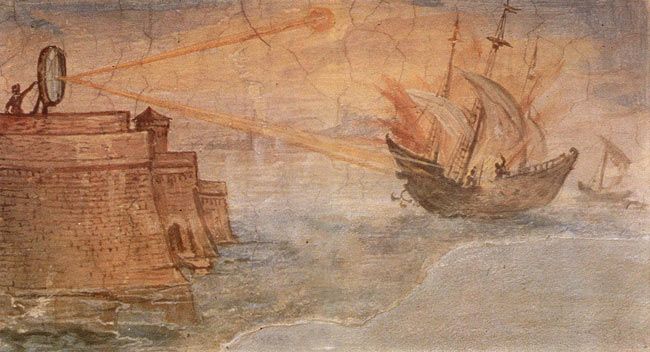 Finally, in 212 BCE, Marcellus was able to take advantage of a Greek festival in the city to sneak past the defences and breach the inland walls. Thus the immediate consequences of Archimedes’ genius may have been slight, merely delaying the fall of Syracuse for a year.

But his legacy to science has been considerable; even that of his perhaps-mythical Burning Mirror, which helped to inspire the research into parabolic dishes that has led to today’s radio telescopes and satellite TV antennae.

Archimedes himself had little regard for the concrete but transitory products of his fertile genius.He preferred the realm of mathematics, where truth is eternal.

Accounts of his de̳a̳t̳h̳ relate that, as the Romans poured into Syracuse and sacked the city, a soldier broke into Archimedes’ house and ordered him to report to Marcellus, but that he was too preoccupied with a mathematical problem and refused to come until it was completed, whereupon the soldier ran him through.

According to the 12th-century Byzantine historian John Tzetzes, supposedly paraphrasing the Roman historian Dio Cassius (155–235 CE), it was a hexagonal mirror (probably of polished bronze), surrounded by smaller square mirrors, the whole assemblage fixed to an armature.

The mirrors gathered the rays of the sun and concentrated them into a laser-like beam, which ignited the Roman galleys from a distance, reducing them to ashes. Today Archimedes’ Burning Mirror is generally considered to be a myth, but early European scientists had mixed feelings about the tale.

In the 17th century Descartes dismissed the story as fantasy, but in 1747 George Louis LeClerc, Comte de Buffon, claimed to have ignited a pine plank from 150 feet (45 metres), using an array of 128 mirrors. 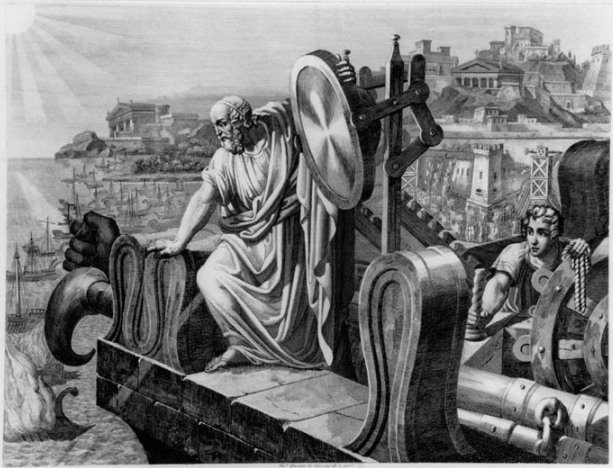 Archimedes and the Burning Mirror
In 1975, Greek scientist Dr Ioannis Sakkas claimed to have used 60 mirrors held up by sailors to ignite a wooden ship from 160 feet (48 metres), while in 2002 a German experiment using 500 people with mirrors supposedly had similar success.

In 2005 a group of MIT students conducted experiments using 30 cm square mirror tiles which is focused on a wooden ship at a range of 30 m. The flame burned small area of the ship.

More recently, in 2010, the Mythbuster, carried out an experiment using 500 mirror which is aimed by school childrens at the Roman wooden ship as the target 120 m away, however the heat failed to reach 300 °C which is required for combustion to occur because of bad weather condition and it was concluded that the ‘mirror’ was a feasible weapon as long as the sky is cloudless, and the ship remained in stationary condition for around 10 minutes.

Even if the technology is feasible, this does not mean the story of Archimedes’ Burning Mirror is true, but perhaps it should not be dismissed out of hand. With or without the Burning Mirror, the genius of Archimedes was too much for Marcellus and the Roman army.