In 1975, two 7-year old boys had a face to face encounter with a pair of “fanged” humanoids, which would haunt them for the rest of their lives.

Sometime before 7 PM, on the evening of February 23, 1975, two grade-school boys, Masato Kawano and Katsuhiro Yamahata, were roller skating near the Hinode Housing Estate in Kamimachi, Kōfu, Yamanashi, Japan, when they noticed a pair of “glittering,” orange U̳F̳O̳s frolicking in the sky above.
The enthralled boys stared in awe as the larger of the two objects broke off and flew toward Mt. Atago, while the smaller one slowly descended to the ground, landing amongst the props of a vineyard behind the estate. The boys later stated that the strange aerial objects emitted an odd crackling or “ticking” sound, not unlike that of a Geiger counter. 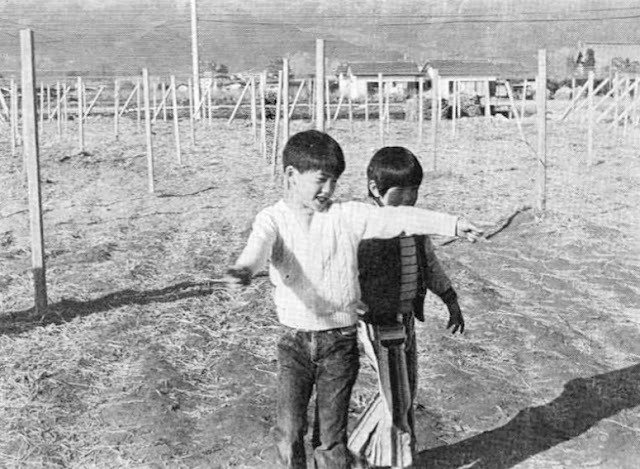 Masato Kawano and Katsuhiro Yamahata
It goes without saying that the curious youngsters wasted no time in removing their skates and charging into the vineyard in order to get a better look at this now earthbound object.

As the two 2nd Graders approached the formerly orange “space craft” they saw that it was actually a domed, silverish disc, which stood approximately 7-feet high and was almost 15-feet in diameter.

This classically shaped flying saucer was perched on “three ball-shaped legs” and had what the children described as “strange characters” embossed on the metallic surface of its hull.

While inspecting the craft, both Kawano and Yamahata were astounded — and no doubt a bit frightened — to see a hatch open on the side of the craft and a ladder automatically extending down to the ground below. 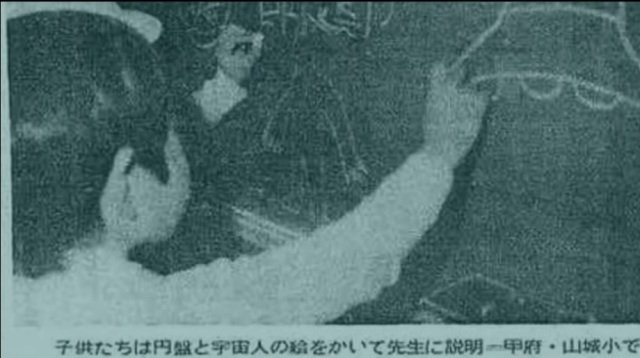 The boys watched in stunned silence as and a bizarre humanoid creature disembarked from the ship. It was at that moment that the boys noticed another — smaller, though similar looking — humanoid that remained inside the control room.

Kawano and Yamahata reported that the first creature was long-armed, almost 4-feet tall and was clad in a “glowing” or reflective silver uniform.

The Kofu entity’s skin was described as being dark brown and covered in wrinkles so dense that they obscured any noticeable features; save three, two-inch long, metal “fangs.”

While the silvery fangs are a new twist, the wrinkly skin might ring a bell for those who have heard of the Pascagoula Elephant Men. This strange a̳l̳i̳e̳n̳ sightseer apparently began to explore the terrain, seemingly oblivious to the enthralled duo staring at it.

That was until it abruptly turned and placed one of its “hands” on Yamahata’s shoulder, patting him twice and uttering a series of sounds that sounded to the boys: “like a tape recorder running backwards.” At this point Yamahata collapsed to the ground, paralyzed.

Although his friend believed that this was caused by fear, anyone familiar with so-called close encounters of the 3rd kind can attest that human beings are often placed in a state of almost suspended animation by extra-terrestrial visitors in, what one must assume, is an effort to prevent them from hurting themselves or anyone else.

As soon a Yamahata dropped, Kawano — exhibiting a commendable bout of courage for one so young — rapidly pulled his friend up onto his shoulders and lugged him away from these vampiric a̳l̳i̳e̳n̳ assailants as swiftly as possible. 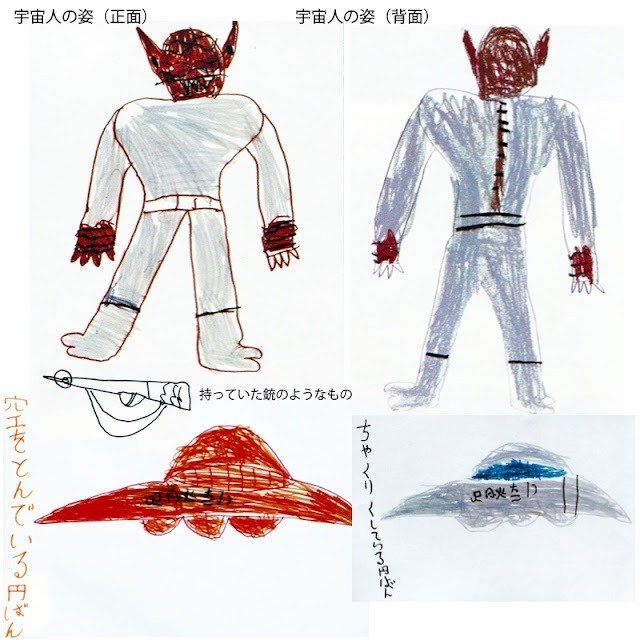 Upon returning home, the now almost hysterical boys immediately informed their mothers about this bizarre close encounter. Their curious — yet almost certainly incredulous — mothers followed their clearly perturbed sons to the back of the Hinode Housing Estate, where, much to their shock, they confirmed seeing an orange light pulsating in the vineyard.

This odd light show continued for five minutes. Before the boys could convince their mothers to investigate the strange craft at a closer range, the U̳F̳O̳ launched with a burst of light so brilliant the eyewitnesses were compelled to avert their eyes.

It should be noted that while Yamahata and Kawano were the only ones to have actually seen the a̳l̳i̳e̳n̳s, their classmate — 8-year-old, Ichiro Minegishi — also reported that he saw a shining object flying toward the Hinode Housing Estate while he was riding in a car with his parents near the Kōfu Bypass, approximately one half-hour before the boys claimed to have discovered the U̳F̳O̳.

The following day, Kawano and Yamahata had a captivated audience of students and teachers at the Yamashiro Elementary School, as they drew pictures and retold the harrowing tale of their a̳l̳i̳e̳n̳ encounter.

It wasn’t long before the buzz enveloped the entire school and the educational authorities — with what, at least in the 21st Century, seems to be uncharacteristic open-mindedness — decided that they would inspect the area for themselves.

The school officials arrived armed with whatever gear they could get hold of and immediately noticed that two solid concrete posts had been “pushed over” at the landing site. 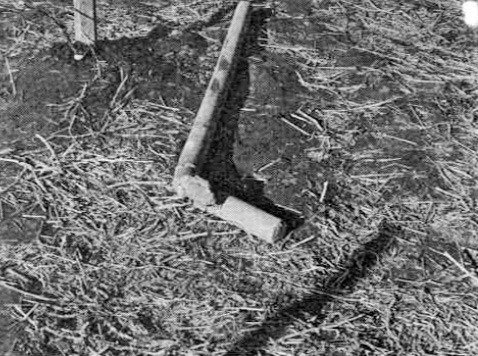 It was determined that the boys would have been unable to accomplish this task of ostensibly intergalactic vandalism on their own. This investigative team also found what they referred to as “landing traces” as well as a ring pattern in the soil near the broken concrete posts where U̳F̳O̳ landed.

There were several holes in the ground where the boys said the ship had landed, another 50-60 centimeters in the ground with a white powdery substance resembling ash in the center.

A high school professor visited the site and took soil samples from that site for testing. When he tested the samples, he found that they contained unnaturally high levels of radiation.

Later, other professors and experts confirmed his findings and determined that the radiation most likely came from a foreign object in contact with the soil, whether it was a U̳F̳O̳, a meteorite, or some kind of radioactive substance thrown out next to the soil. The professor who performed the initial test was Susumu Maeda, who specialized in radiology.

Following the event, both boys were questioned in depth by their parents, their schoolmaster, Nobuyoshi Kaneko, and noted U̳F̳O̳ investigator Masaru Mori — there stories remained alarmingly consistent.

Unsurprisingly, the authorities of Civil Aviation Bureau of Transportation Ministry claimed that the U̳F̳O̳ was nothing more than the lights of YS-ll propeller plane, which often flew at an altitude of thousand meters and was visible to the naked eye.

They apparently reserved comment as to whether or not this aircraft could also assume the form of small, pointy eared, fanged humanoids.

Yamahata and Kawano never doubted their story, and in 1982, at the age of 14, both revisited the incident. In 2001, they took part in a show during which they were both taken to different rooms and hypnotized. During the hypnosis, they again recounted what they had said earlier.

Now both are over 50 years old and they continue to insist that they saw exactly what they saw.