“This seems never before to have been found on Earth” – Prof. Milton Wainwright, the University of Sheffield.

When a planet harboring life is hit by a small traveling body such as an asteroid or comet, some of its microscopic life forms might get trapped inside ejected debris. Entering a dormant state, they could theoretically survive long journeys into outer space.

Should some of this debris collide with a planet that has the right conditions to sustain life, the microscopic travelers would once again become active. This way, a barren planet could be seeded with life.

Even if it might come as a surprise, this theory isn’t that far-fetched. Just last year, sea plankton was found on the outside of the International Space Station and no one knows how it got there.

Our own planet is home to some resilient microorganisms, known as extremophiles. As their name suggests, they can thrive in some of the most extreme conditions: near hydrothermal vents on the ocean bed, or in very acidic environments.

Experiments carried out by Japanese researchers showed that some species not only survive conditions of extreme gravity, they thrive in them. One species was subjected to 400,000 the gravity experienced on Earth and did just fine.

Some species of extremophiles survive temperatures well below freezing and they also survive high doses of radiation.

But the most important aspect is that scientists have found 40 million-year-old spores that were still viable. In short, they survive everywhere and for extremely long periods of time.

It would therefore be reasonable to assume they would survive an impact that destroyed their home planet, a cosmic journey and another impact that would deposit them onto another planet. Life on Earth could have well originated elsewhere in the universe.

And now the news.

A few years, a joint team of scientists from the University of Buckingham and the University of Sheffield discovered a tiny but very interesting object. They sent balloons to an altitude of 16 miles (27 kilometers) in order to collect samples of dust and particulate. One of them brought back something unexpected. 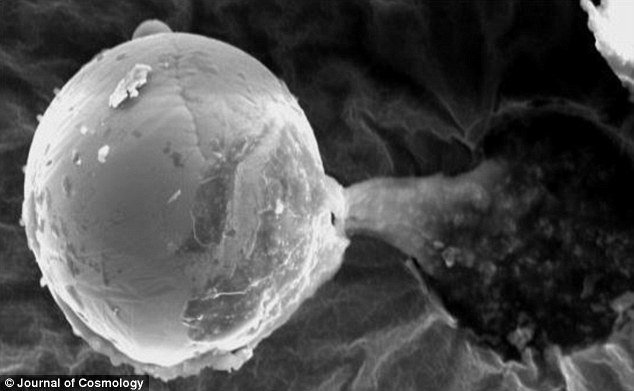 This. Microscopic metal sphere.
A tiny metal sphere about the width of a human hair had collided with the surface of the sampler connected to the balloon, leaving a minuscule crater. This suggests that it had been travelling at high speed. Professor Wainwright explains:

“On hitting the stratosphere sampler the sphere made an impact crater, a minute version of the huge impact crater on Earth caused by the asteroid said to have killed off the dinosaurs.

“This impact crater proves that the sphere was incoming to Earth from space, an organism from Earth would not be traveling fast enough when it fell back to earth to cause such a damage.”

X-ray analysis of the sphere showed that it was made of titanium with traces of vanadium. Titanium is one of the strongest metals known to man and it also has a high melting point. This led Wainwright and his team to believe that the sphere was fabricated and perhaps of e̳x̳t̳r̳a̳t̳e̳r̳r̳e̳s̳t̳r̳i̳a̳l̳ origin. Hold on, it gets weirder.

The surface of the sphere was covered in a “fungus-like knitted mat-like covering” and a biological liquid was “oozing from its center.” It is these organic compounds that have baffled the scientists. Although intriguing, their discovery is called into question by colleagues who believe it was contaminated by particles that originated on Earth.

The team are planning further analysis of the samples. They also hope their find will be corroborated by NASA’s own stratospheric balloon set to be launched in the near future. Should NASA find similar particles and establish they are of e̳x̳t̳r̳a̳t̳e̳r̳r̳e̳s̳t̳r̳i̳a̳l̳ origin, the scientific world would be forced to take into account the theory of panspermia.

Wainwright’s colleague, Professor Chandra Wickramasinghe, the director of the Buckingham Center for Astrobiology has been a proponent of this theory for a long time.

“Mainstream science and institutions have fought against theories which expound these beliefs but now evidence from meteorites, from samples of bacteria from space and from space observation is making resistance more difficult.

“Proving that the Earth is in a constant exchange of matter with the larger cosmos would have implications not only in terms of our identity, but could also give us insight into a̳l̳i̳e̳n̳ viruses which may be important for our group identity, evolution and survival itself,” he told the Daily Express.

Wainwright suspects the sphere might be evidence of directed panspermia, or the deliberate spreading of life throughout the universe. Before labeling him as “far off”, we should note that Francis Crick, Nobel Prize winner for the co-discovery of the structure of the DNA molecule shared similar views.

Humanity itself might start sending its own life capsules toward suitable worlds in the near future in order to secure and expand life in space. Even if it’s science fiction at the moment, sending a payload of hardy microbes attached to a solar sail could become scientific fact in less than a century.

But we might have unintentionally sent out microorganisms already. There’s no way of knowing for sure that no extremophiles hitched a ride with the rovers sent on Mars. Maybe they’re already multiplying and establishing colonies but that’s just speculation.

The directed panspermia hypothesis raises several legitimate questions. Was life deliberately planted on Earth? Was it sent by a sufficiently advanced civilization more than three-and-a-half billion years ago, when our planet was young and sterile? How would we answer this question?

Since the early 1980’s, some publications suggested that the deliberate seeding of life could be demonstrated if the genetic code of the first microorganisms on Earth would contain a “distinctive signature message”, like a calling card left by the engineers.

Until more evidence turns up, we’ll just have to wait and see which way the tiny, presumably a̳l̳i̳e̳n̳ sphere rolls.