Great Leighs in Ess̳e̳x̳ has acquired a reputation as a haunted village. This is due to ghost stories told about the St Anne’s Castle, a local pub, and the Witch of Scrapfaggot Green, whose spirit was alleged to have terrorized the area during World War II.

According to articles in the Sunday Pictorial of 8 and 15 October 1944, the village of Great Leighs (Ess̳e̳x̳) was being plagued by nocturnal accidents to livestock, tools scattered, bells ringing, etc.

They said it was because bulldozers widening a lane to a military base had pushed aside a boulder at a crossroads called Scrapfaggot Green – a boulder covering the remains of a witch, together with the fire that burnt her.

The St Anne’s Castle stands prominently on Main Road, the village’s principal street, en route from Chelmsford to Braintree. Philip Morant’s History of Ess̳e̳x̳ (1768) says the building was once a medieval hermitage and became an alehouse in the Elizabethan era.

The name ‘Scrapfaggot’ invites puns, there are historical records of a witchcraft case at nearby Boreham, and there seems to have been a ‘Witch Stone’ around in the 1930s (even though not at the crossroads). Since the 1980s, a stone outside a pub in Great Leighs is claimed to be the original, supposedly brought there in 1945.

In October 1944, the Sunday Pictorial, a sister newspaper to the Daily Mirror, ran an article with the headline “The witch walks at Scrapfaggot Green”. Arthur Sykes, who was now an ARP Warden, said: “Every day I hear of new mischief”. Three geese had disappeared from a pen in his back garden. A haystack had collapsed.

Alfred Quilter, a local shepherd, found his sheep had moved from their field to another paddock, yet the surrounding hedges and fences were all undamaged. Charlie Dickson, a builder, said heavy scaffolding poles were “scattered in his yard like matchsticks.” The clock on the church tower had been running two hours late, and striking at midnight, despite being fitted with devices to prevent it chiming at night. 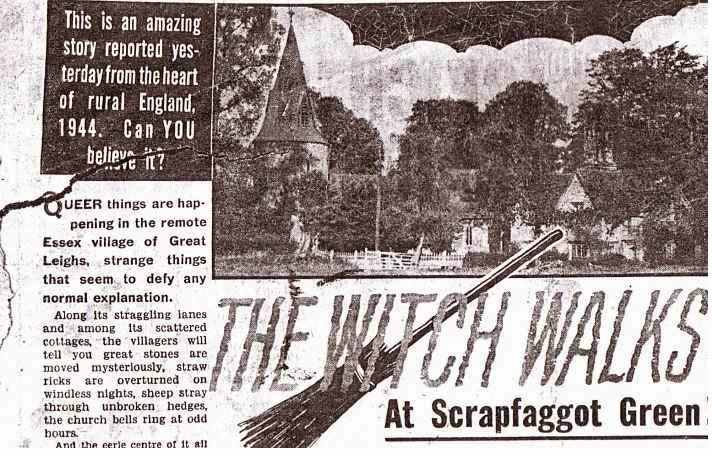 Also there were strange happenings at the Dog and Gun, a pub on the Boreham Road, 2.5 miles (4km) south of the St Anne’s Castle. Paint pots and brushes vanished from outside and were found neatly lined up under a bed in an attic. When some regulars were leaving one night, they nearly fell over a boulder that had seemingly materialized less than five feet (1.5m) from the door of the pub.

Arthur Sykes said that 200 years previously a witch had been burnt at the stake at a crossroads near the Dog and Gun and her remains buried beneath a stone. Ever since, the spot had been known as Scrapfaggot Green.

When Boreham airbase was built, the stone had been moved, thus releasing the witch’s spirit. The villagers declare that their misfortunes dated from the day when American bulldozers widened the road at Scrapfaggot Green, the centre of the village, thus displacing a two-ton stone that marked the remains of a 17th-century witch who had been buried (with a stake through her chest) at the crossroads there.

Now, she was terrorizing the area, even moving her stone to the Dog and Gun! The News Chronicle reported that some villagers had mounted night-time patrols to catch the culprit.

The US magazine ‘Time’ reported the story, saying that the morning after the stone was replaced it had been moved again, with a message on it saying ‘non in sum’, Latin for ‘not here’ or ‘nobody home’.Two weeks later, the Evening News said that flowers had been placed on the stone.

Meanwhile, the Sunday Pictorial contacted the celebrated psychic researcher Harry Price, whose best-known investigation at Borley Rectory had resulted in his 1940 book “The Most Haunted House in England”.

Price, Arthur Sykes and the Sunday Pictorial reporters decided to lay the witch’s spirit to rest by returning the stone from the Dog and Gun to her grave at Scrapfaggot Green. However, before they could do so, another farmer found rabbits in his chicken coop.

Then Price told the villagers that if they believed the witch to be responsible for their troubles, the logical thing to do was to restore her tombstone to its original site. This they did, ceremonially, at midnight on October 11-12, 1944, placing the stone east and west in the traditional manner. The phenomena ceased.