The Hal Saflieni Hypogeum, is an underground network of alcoves and corridors carved into soft Globigerina limestone just three miles from what is now the capital city of Valletta.

This burial place was so named after the street under which it was discovered in the early years of the last century. Hypogeum is the Latin name for an underground structure.

One of the intriguing stories to come out of the Maltese islands tells of thirty school children who, they say, were forever lost in the hidden underground tunnels accessible from the Hal Saflieni Hypogeum. The tale has even made the headlines in national newspapers. 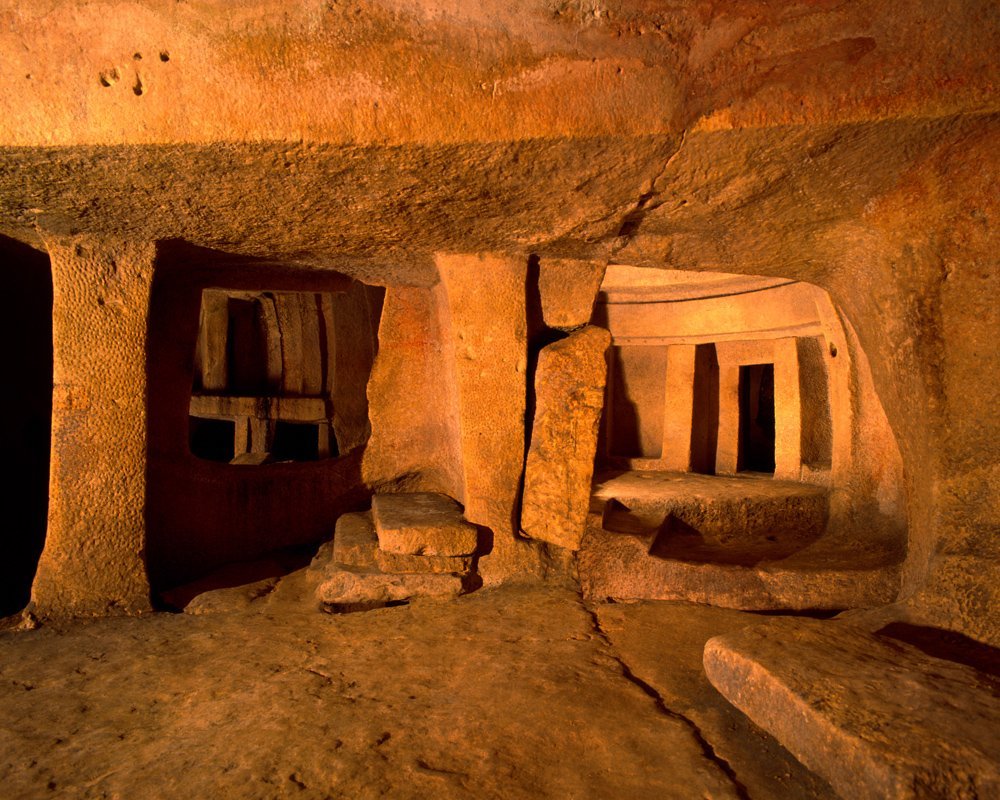 Archaeological evidence suggests that around 4,000 BCE, the people of Malta and Gozo used flint and stone tools to carve out the first level of the burial site from natural caves, and then gradually worked their way underground, creating three levels in the stone.

They began building with the purpose of ritualizing life and de̳a̳t̳h̳.

The builders expanded existing caves and over the centuries excavated deeper, creating a temple, cemetery and funeral hall that would be used throughout the Żebbuġ, Ġgantija and Tarxien periods.

Over the next 1,500 years, known as the Temple Period, above-ground megalith structures cropped up throughout the archipelago, many with features that mirror their subterranean counterparts.

Masons discovered an opening to the chamber in 1902 when they were laying the foundation for a house. The site was restored in the 1990s, and is now a UNESCO World Heritage site.

In the third (and last) sub-level of the Hypogeum, one of the burial chambers located at floor level is supposedly a doorway into another underground world. These are only a few feet square and situated right next to the floor. 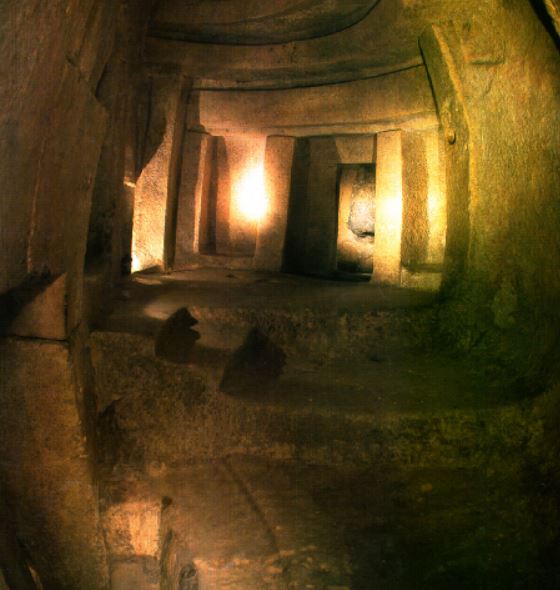 Interestingly, this lower level is no longer physically accessible to visitors after the recent refurbishment of the Hypogeum.

Regarding the stories of children who were lost in such tunnels, two printed articles in leading magazines had appeared.

According to Malta Independent, in an article which appeared in the 1940 August issue of the National Geographic magazine, stated the following concerning several people who disappeared in these catacombs without a trace:

“Many subterranean passageways, including A̳n̳c̳i̳e̳n̳t̳ catacombs, now are a part of the island’s fortifications and defence system. Supplies are kept in many tunnels; others are bomb shelters.

“Underneath Valletta, some of the underground areas served as homes for the poor. Prehistoric man built temples and chambers in these vaults. In a pit beside one sacrificial altar thousands of human skeletons were found. Years ago one could walk underground from one end of Malta to the other.

“The government closed the entrances to these tunnels after school children and their teachers became lost in the labyrinth while on a study tour and never returned.”

The story, however, goes much “deeper” than the National Geographic article indicates. Other sources say that about 30 children vanished in these catacombs on a study tour, and when the “Hypogeum” was first discovered nearly 30,000 human skeletons of men, women and children (victims of A̳n̳c̳i̳e̳n̳t̳ sacrifice to the “underworld gods”, performed by an old Neolithic race) were discovered as well.

Allegedly, the children were never found but were heard wailing from underground for several weeks in different parts of the island.

However, no one could locate where the sound was coming from. And – adding further to the mystery – none of these so-called witnesses are alive today to explain more.