On March of 2011, according to residents of the small border village of Dulali in Lanzai South Ward, Darazo Local Government A̳r̳e̳a̳ of Bauchi state, the global paranormal phenomenon of Unidentified Flying Objects (U̳F̳O̳), also known as flying saucer, was sighted in Nigeria.

At that time, practically the entire village consisting of a few hundred people saw a bright light in the sky immediately after morning prayer at the local mosque. Soon after, they saw a massive “flying city” or “floating city” descending from out of the sky.

One of the eyewitnesses, Saidu Meshai Dulali, who makes a living brewing hot tea, coffee, and cocoa beverages for locals, journalists from a Nigerian newspaper that he saw the light in the sky after morning prayer at the local mosque while preparing to start the day’s work.

Suddenly, he became aware of a pervading bright light enveloping the atmosphere, followed by a sudden realisation that the heavens were falling on the village.

As he looked up at the encroaching sky, he saw the most amazing view of his forty years of existence. According to him, “There appeared a wide, large mass of something that looked like a cloud from nowhere and it was flying slowly over the village just at the height of an average tree.

“The cloud was transparent and I saw beautiful tall buildings inside it, with tarred roads and cars. It was like a flying city. And from it I could hear the sound of machines making noise just as you would hear at Ashaka cement factory.”

If Saidu were the only witness of this extraordinary experience, it would have been impossible to take his testimony as a fact. Interestingly, the ‘flying city’ was witnessed by almost all the villagers, hundreds of them, the Chief Imam of the sole village Mosque inclusive. Children and adults all saw and corroborated the story. 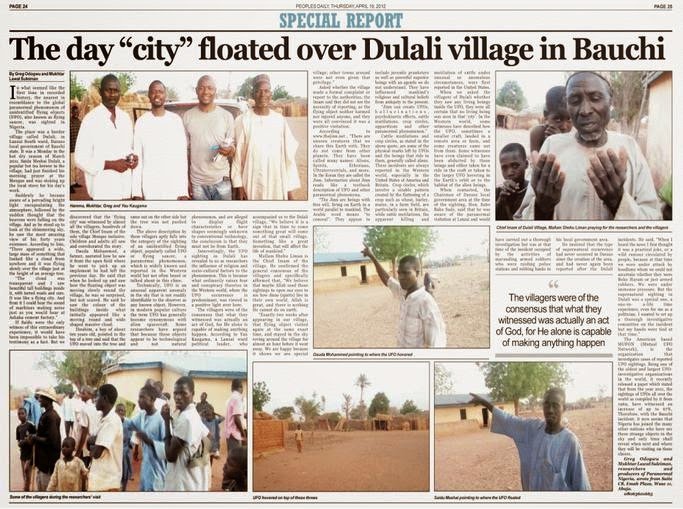 Dauda Mohammed, a farmer, also saw the while he was out in the fields. He said he noticed the U̳F̳O̳ over the sky and that he was more astonished than scared. He also said he saw buildings in the “floating city” which appeared swathed in clouds.

A 10-year-old boy, Ibrahim, said he saw the “U̳F̳O̳” passing behind a tree and appearing on the other side. The young boy was evidently confused about his perspective view of the extraordinary object because he seemed to think the U̳F̳O̳ passed through the trees.

“We believe that maybe Allah used those sightings to open our eyes to see how Jinns (spirits) live in their own world. Allah is great, and there is nothing he cannot do on earth.

Exactly two weeks after appearing in our village, that flying object visited again at the same exact time, and stayed in the sky roving around the village for almost an hour before it went away. We are happy because it shows we are special village; other towns around were not even given that privilege.”

However, Brian Engler, commenting on the website, Doubtful News, thinks the “U̳F̳O̳” could have been a “fata morgana” mirage.

“This sounds like a ‘fata morgana’ mirage to me, although I have no idea whether the meteorologic conditions at the time and place would have supported that. Brian Dunning has described the effect several times on Skeptoid and there’s a description that starts out talking about ‘castles in the air’ which sounds a lot like what these folks described. Interesting in any case.”

When the villagers of Dulali were asked whether they had seen any living beings inside the U̳F̳O̳, they were all certain and specific with their response that indeed no living being was seen in that apparent ‘city’ in the sky.

Back then, in 2009, few had mobile phones in Nigeria. This is especially true for suburban residences. An amazing case remained only in the minds of the residents. Emery Smith: I’ve Worked With Alien Spaceships That Would Change The World As We Know It