How does it feel to see flying saucers? Like most people, we had never consciously expected to face that question, but now we have an answer. When you see “saucers” from the angle and nearness that we did, and watch them go through the astonishing maneuver that we witnessed, you feel humbled.

Sitting in the complex cockpit of a fast four-engined airliner, we had the deflated feeling that we and our modern airplane were so far outclassed by somebody and something else that it wasn’t at all funny.

On the night of July 14, 1952, we were ferrying a Pan American ‘World Airways DC-4 from New York to Miami. There was a crew of three-Ca pain Fred Koepke and ourselves- and ten passengers, company personnel and their families. The night was clear and visibility unlimited.

The only clouds, practically invisible to us, were reported to be thin cirrus, three-tenths at 20,000 feet. Occupying the pilot and co-pilot seats, we flew at 8,000, cruising on the automatic pilot over the Chesapeake Bay, as we approached Norfolk. Virginia, which lay about 20 miles in front of us on our compass course of 200 degrees magnetic – a little west of south.

We were due to overhead the V. H.F. radio range station at Norfolk in six minutes and make a position report then. The sun had set a n hour before and though we could still make out the coastline , the night was almost entirely dark. The distant lights of the cities stood out plainly, undimmed by any haze. One of us pointed out to the other the city of Newport News, which lay forward and to our right.

Suddenly a red brilliance appeared in the air beyond and somewhat eastward­ that is, to our side-of Newport News. We saw it together at practically the same moment. The remark of one of us was, “What the hell is that?” It hadn’t grown gradually into view-it seemed simply to have appeared, all of a sudden, in place. 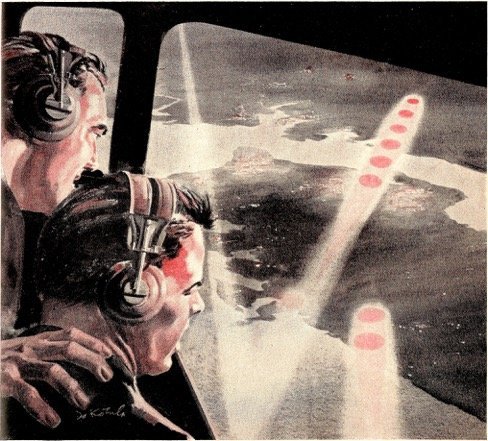 Almost immediately we perceived that it consisted of six bright objects streaking toward us at tremendous speed, and obviously well below us.

They had the fiery aspect of hot coals, but of much greater glow-perhaps twenty times more brilliant than any of the scattered ground lights over which they passed or the city lights to the right. Their shape was clearly outlined and evidently circular; the edges were well defined, not phosphorescent or fuzzy in the least. The red-orange color was uniform over the upper surface of each craft.

Within the few seconds that it took the six objects to come half the distance. from where we had first seen them, we could observe that they were holding a narrow echelon formation – a stepped-up line tilted slightly to our right, with the leader at the lowest point and each following craft slightly higher.

At about the halfway point, the leader appeared to attempt a sudden slowing. We received this impression because the second and the third wavered slightly and seemed almost to overrun the leader, so that for a brief moment during the remainder of their approach the positions or these three varied.

It looked very much as if an element of “human” or “intelligence” error had been introduced, in so far as the following two did not react soon enough when the leader began to slow clown and so almost overran him.

We judged the objects’ diameter to be a little larger than a DC-3 wingspread would appear to be about 100 feet – at their altitude which we estimated at slightly more than a mile below us, or about 2,000 feet above ground level.

When the procession was almost directly under and slightly in front of us­ the pilot had to rise hurriedly from the left-hand seat and lean to see them ­ the objects performed a change of direction which was completely amazing.

All together, they flipped on edge, the sides to the left of us going up and the glowing surface facing right. Though the bottom surfaces did not become clearly visible, we had the impression that they were unlighted.

The exposed edges, also unlighted, appeared to be about 15 feet thick, and the top surface, at least, seemed Hat. In shape and proportion, they were much like coins. While all were in the edgewise position, the last five slid over and past the leader so that the echelon was now tail-foremost, so to speak, the top or last craft now being nearest to our position.

Then without any arc or swerve at all, they all flipped back together to the flat altitude and darted off in a direction that formed a sharp angle with their first course, holding their new formation.

The change of direction was acute and abrupt. The only descriptive comparison we can offer is a ball ricocheting off a wall.

Immediately after these six lined away, two more objects just like them darted out from behind and under our airplane at the same altitude as the others. The two newcomers seemed to be joining the first group on a closing heading.

Then suddenly the lights of all of the objects blinked out, and a moment later blinked on again with all eight in line speeding westward, north of Newport News, and climbing in a far, graceful arc that carried them above our altitude. There they disappeared, while still in view, by blinking out one by one – not in sequence, but in a scattered manner. 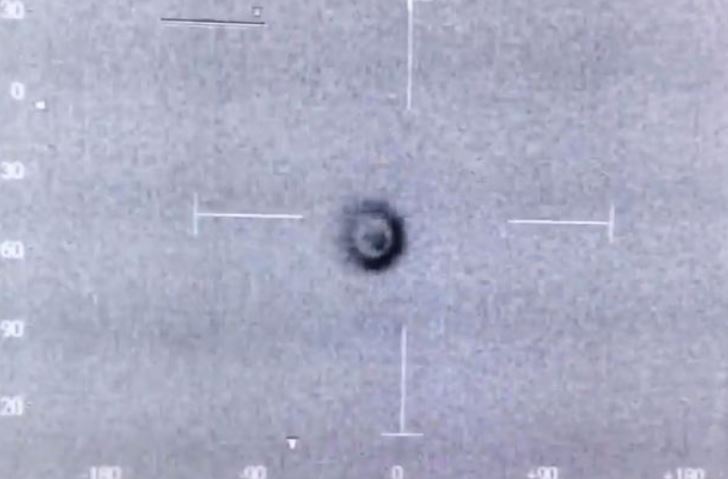 There had seemed to be some connection between the lights and the speed. The original six had dimmed slightly before their angular turn and had brightened considerably after making it. Also the two others were even brighter, as though applying power to catch up.

We stared after them, dumbfounded and probably open-mouthed. We looked around at the sky, half expecting some¬ thing else to appear, though nothing did. There were flying saucers, and we had seen them.

What we had witnessed was so stunning and incredible that we could readily believe that if either of us had seen it alone, he would have hesitated to report it. But here we were, face to face. We couldn’t both be mistaken about such a striking spectacle.

The time was 8: 12 Eastern Standard Time. The whole thing had occurred very quickly; we agreed on an estimate of 12 seconds. Now for the question, not too hopeful: had anybody else aboard seen it?

The co-pilot went through the small forward passenger compartment, where the captain was intent on paperwork. In the main cabin, some of the passengers were dozing. A cautious inquiry whether anyone had happened to see anything unusual brought no results.

Back in the cockpit, we discussed and formulated a quick report. We called the Norfolk radio as we passed over it, gave our position according to routine, and upon receiving confirmation of that message added a second which we requested be forwarded to the military:

“Two pilots of this flight observed eight unidentified objects vicinity Langley Field; estimate speed in excess of 1,000 m.p.h.; altitude estimated 2,000 feet.” The captain came forward and was told of the incident and the message; he took over while we went to work figuring and writing notes on what we had seen.

With a Dalton Mark 7 computer, a kind of pivoting calculator, we swung the azimuth from the longitudinal axis of the airplane to the saucers’ angle of approach toward the nose, as well as we could re­ member it, then did the same for their angle of departure. We found that the difference was only about 30 degrees; therefore they had made a 150-degree change of course almost instantaneously.

The G force produced in such a turn we couldn’t begin to figure, of course, even if we had known how, for it would de­ pend on duration and speed and there was where we really ran into something. By reference to the chart, we estimated that the saucers’ track, from the locality where we had first seen them to the place where they had disappeared, covered about 50 miles, and they had traveled it in 12 seconds. 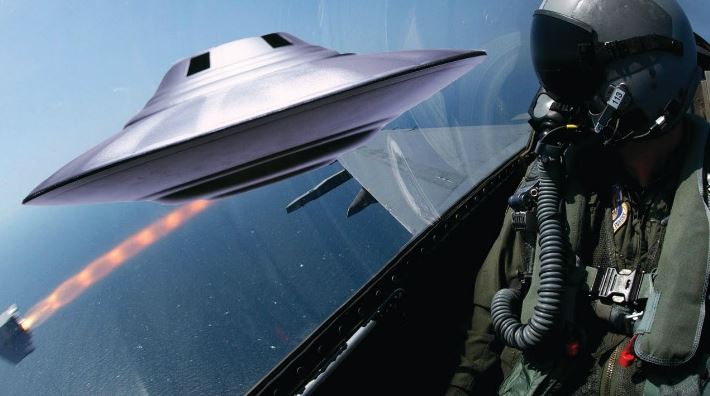 A while later, while we were still discussing the matter, the lights of a north­ bound four-engined airliner came into view on a course about 1,000 feet above us. If any normal happening could have increased the effect of our night’s experi­ence on us, it was that commonplace event. Ordinarily, the head-on approach of two airliners – their closing speed would be 500-550 M.P.H.-seems pretty brisk. This night the oncoming plane seemed to be standing still, after the streaking speed of the saucers.

We landed at Miami International Airport shortly after midnight. On entering the operations office, we found filed, from our New York dispatcher, a copy of the saucer message we had transmitted through Norfolk, with an addition: “Advise crew five jets were in area at the time.” That didn’t exactly apply; the things we had seen were eight in number, and we were dead sure they were no jets.

Then we phoned the officer on duty at the Air Force headquarters on the airport and told him we •had a report to make concerning some strange unidentified objects. He took our names and addresses and said we would be contacted by the proper authorities.

We were. At 7 a. m. we were tele­ phoned by Air Force investigators and appointments were set for an interview later that morning. For a considerable time both of us were earnestly and dili gently interrogated, separately and together.

We were surprised by being told at the end that our particular experience wasn’t by any means unique. We have both been flying for more than ten years, we have had plenty of service drill on aircraft recognition, and in thousands of hours of flight time neither of us has ever seen anything even remotely resembling the strange and un­ forgettable objects we saw near Newport News on July 14.

Maybe there is some sort of confirmation in the fact that, following our sighting, the Washington radar twice picked up unidentified objects, on July 19 and 26, and that on the second occasion a pursuing jet flier reported being outdistanced by four disappearing lights.

What were the saucers we saw doing there? We have no idea. One of us thought that their sudden lighting up suggested that they may previously have been hovering. In any case, whether they saw us and came to investigate, or happened to move toward our position and took alarm, or rendezvoused there with the last two, or had some entirely different purpose, are about equally undeterminable guesses.

Though we don’t know what they were, what they were doing _or where they came from, we are certain in our minds that they were intelligently operated craft from somewhere other than this planet.

We are sure that no pilot, able to view them as we did, could conceive of any earthly aircraft capable of the speed, abrupt change of direction, and acceleration that we witnessed, or imagine any airplane metal that could withstand the heat that ought to have been created by friction in their passage through the dense atmosphere at 2,000 feet.

Whether they were controlled from within or remotely, we can’t say, but it is impossible to think of human flesh and bone surviving the jolt of their course reversal. We have the usual reasons, too, for not believing that they were secret-guided missiles.

It is not logical that our own armed services would experiment with such devices over large cities and across airways, and another nation would not risk them here. Nor could anybody’s science have reached such _a stage of development without some of the intermediate steps having become public knowledge.

One thing we know: mankind has a lot of lessons to learn… from some­ body. – William B; Nash and William J. Fortenberry