“We have never seen anything like this,” Algirdas Slepavičius, the chief surgeon of the Klaipeda hospital, told the local media.

The man began to absorb metal objects in a strange way. It started a month after he decided to quit drinking alcohol.

Obviously, something went wrong with his sobriety program. Some items were longer than 10 cm. Doctors removed more than one kilogram of nails, screws and other metal objects from the man’s abdomen after he complained to the hospital.

The man, whose identity will remain anonymous due to patient privacy policies, was admitted to a hospital in the Baltic port city of Klaipeda, Lithuania, with stomach pains. 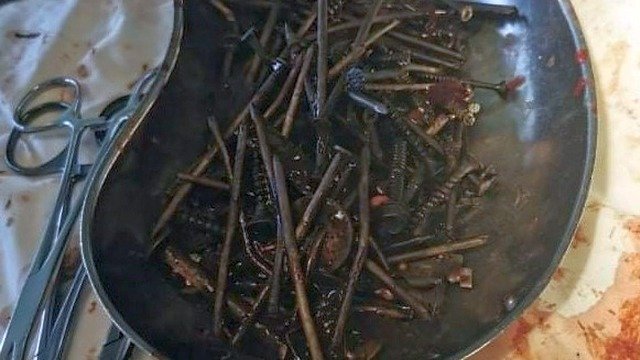 The man admitted that he began to swallow metal objects soon after he quit drinking. According to hospital staff, an X-ray of his stomach showed that some of these parts are more than 10 cm in size.

Surgeon Sharunas Dailiden said: “During the three-hour operation with X-ray control, all foreign bodies, even the smallest ones, were removed from the patient’s stomach.”

The hospital posted a photo of a surgical tray littered with nails and screws taken from his abdomen.

“We have never seen anything like this,” Algirdas Slepavičius, the chief surgeon of the Klaipeda hospital, told the local media.

The doctor said that the man had swallowed metal objects for the past month after quitting drinking. He added that after the operation, the patient’s condition remains stable.