Scientists have been able to revive tiny, worm-like living organisms found in the ice of Siberia, 24,000 years old. After thawing, the creatures lived and could eat, and then reproduce, reports Current Biology.

The data obtained can help to understand how it is possible to freeze multicellular tissues, for example, internal organs, for long periods of time. And if we look completely into the future, then the “worm” can help teach us to “freeze” people when flying into distant space.

In fact, this creature is called a rotifer from the subclass Bdelloidea. Rotifers are tiny creatures that live in freshwater bodies. Scientists have known for a long time that they can easily withstand a prolonged drought, and then recover, but a recent experiment showed that rotifers are able to “sleep” for 24 thousand years without harm!

Scientists from Russia, the USA, Germany and the Czech Republic decided some time ago to check whether rotifers have survived in the Siberian permafrost.

They took ice samples from a depth of 3.5 meters off the banks of the Alazeya River in Yakutia, and then examined them under a microscope. The site near the Alazeya River was chosen because scientists knew exactly how old the permafrost deposits were.

Scientists found several viable rotifers in the thawed samples at once, after which they began to observe them and soon saw how they began to feed and reproduce (by the way, rotifers do not need a s̳e̳x̳ual partner to reproduce). 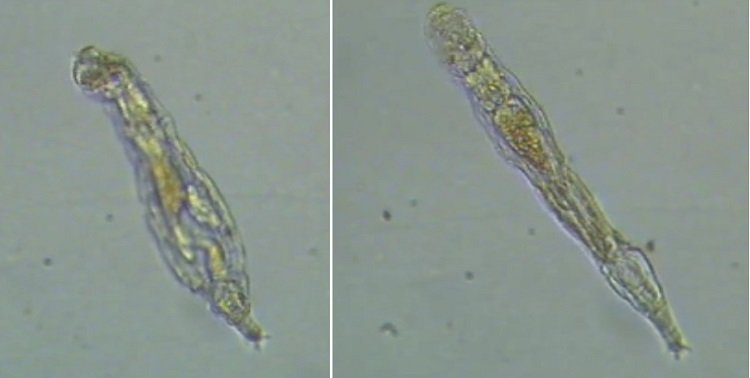 A detailed study of the found rotifers showed that these A̳n̳c̳i̳e̳n̳t̳ Yakut creatures are very similar to the modern species of rotifers Adineta vaga, which are found in the region of Belgium and neighboring countries.

Then the scientists subjected the thawed “worms” to re-freezing and they tolerated it just as well as the first. Moreover, many modern species of rotifers do not have this ability, their tissues are destroyed during the formation of ice crystals.

According to scientists, this shows that A̳n̳c̳i̳e̳n̳t̳ rotifers had a certain protective mechanism (apparently in case of a sharp cold snap).

And now the task of scientists is to understand how this mechanism works and how its principles of operation can be applied when freezing other living organisms, including humans.