U̳F̳O̳ sightings have been around for longer than you might think. Obviously, this phenomenon appeared much earlier than 20 years, as the American government now asserts to us.

Back in the mid-sixteenth century, the people of Nuremberg were treated to an otherworldly scene across the skyline of their city.

A mass sighting of celestial phenomena or unidentified flying objects (U̳F̳O̳) occurred in 1561 above Nuremberg (then a Free Imperial City of the Holy Roman Empire). The phenomenon has been interpreted by some modern U̳F̳O̳ enthusiasts as an aerial battle of e̳x̳t̳r̳a̳t̳e̳r̳r̳e̳s̳t̳r̳i̳a̳l̳ origin.

On April 14th, 1561, several residents of Nuremberg claimed to have seen hundreds of globes, cylinders, rods, and other strange objects at sunrise.

According to witnesses, these objects flew across the face of the sun, giving the impression of a celestial battle taking place against the morning sky.

The people of Nuremberg also claimed to have seen a black triangular object before hearing a distinctive crash coming from the outer regions of the city.

Historians know these odd details thanks to a Nuremberg broadsheet produced by Hans Glaser. Glaser was a professional painter and illustrator from the city, and his depiction of the event was accompanied by a written description. 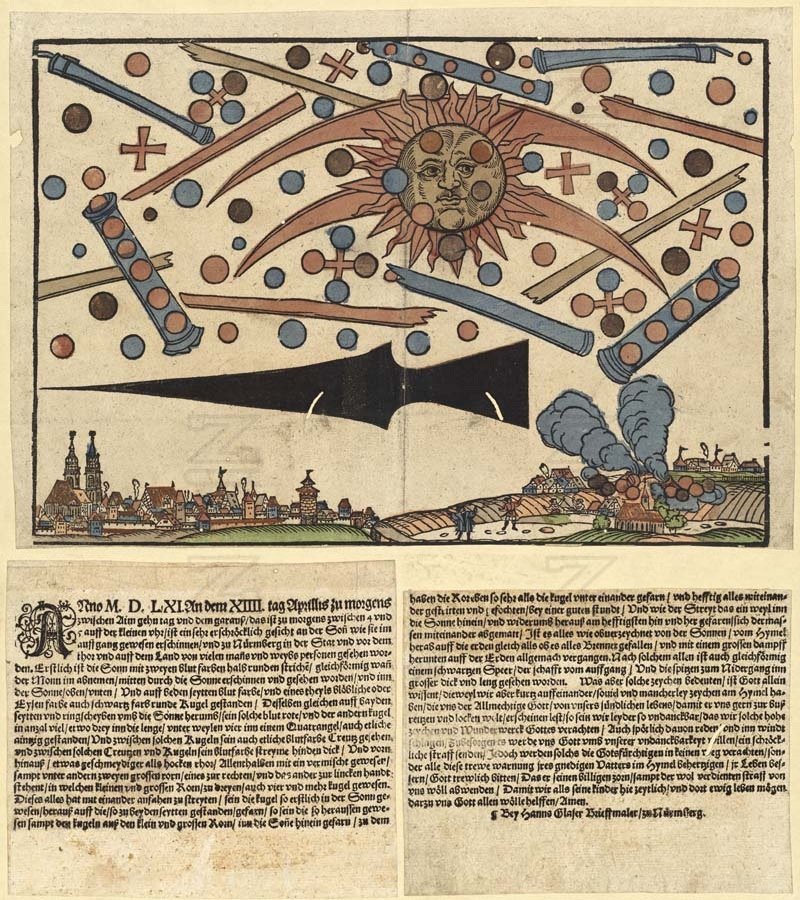 Here is a full translation done by Ilse Von Jacobi from the book “The U̳F̳O̳ Sighting Over Nuremberg in 1561” :

“In the morning of April 14, 1561, at daybreak, between 4 and 5 a.m., a dreadful apparition occurred on the sun, and then this was seen in Nuremberg in the city, before the gates and in the country – by many men and women.

“At first there appeared in the middle of the sun two blood-red semi-circular arcs, just like the moon in its last quarter. And in the sun, above and below and on both sides, the color was blood, there stood a round ball of partly dull, partly black ferrous color.

“Likewise there stood on both sides and as a torus about the sun such blood-red ones and other balls in large number, about three in a line and four in a square, also some alone.

“In between these globes there were visible a few blood-red crosses, between which there were blood-red strips, becoming thicker to the rear and in the front malleable like the rods of reed-grass, which were intermingled, among them two big rods, one on the right, the other to the left, and within the small and big rods there were three, also four and more globes.

“And when the conflict in and again out of the sun was most intense, they became fatigued to such an extent that they all, as said above, fell from the sun down upon the earth ‘as if they all burned’ and they then wasted away on the earth with immense smoke.

“After all this there was something like a black spear, very long and thick, sighted; the shaft pointed to the east, the point pointed west. Whatever such signs mean, God alone knows.

“Although we have seen, shortly one after another, many kinds of signs on the heaven, which are sent to us by the almighty God, to bring us to repentance, we still are, unfortunately, so ungrateful that we despise such high signs and miracles of God.

“Or we speak of them with ridicule and discard them to the wind, in order that God may send us a frightening punishment on account of our ungratefulness.

“After all, the God-fearing will by no means discard these signs, but will take it to heart as a warning of their merciful Father in heaven, will mend their lives and faithfully beg God, that He may avert His wrath, including the well-deserved punishment, on us, so that we may temporarily here and perpetually there, live as his children. For it, may God grant us his help, Amen. By Hanns Glaser, letter-painter of Nurnberg.”

For centuries, historians have tried to interpret what actually happened. What is true in Glazer’s description, and what is fiction.

What lies on the surface is an undeniable religious subtext, especially noticeable in the final lines. It explicitly states that this phenomenon is actually God’s call to repentance.

This led some researchers to believe that Hans Glaser had heavily embellished a real U̳F̳O̳ phenomenon and used it as a form of religious propaganda.

Meanwhile, skeptics say with confidence that the Nuremberg 1561 event was not a battle of a̳l̳i̳e̳n̳ spaceship but a series of unusual weather events that was given a religious tone and sensationalized by Hans Glaser, because of poor understanding as well as to feed the public’s hunger for outrageous stories.

It is difficult to say what happened more than 400 years ago, but then people clearly saw something unusual.