Approximately 80,000 men aboard 1,000 planes and 200 ships participated in a display of force meant to demonstrate NATO’s effectiveness in the event of the Soviet Union attacking western Europe. 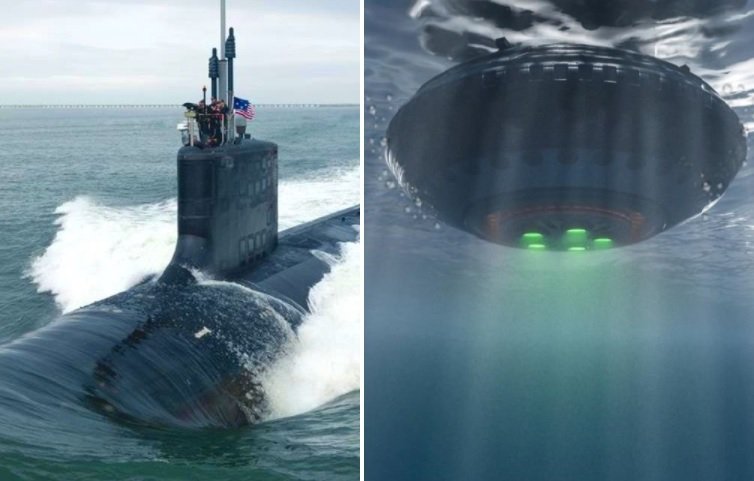 This massive operation caught the eye of everyone in the vicinity and, apparently, not all of them were human. The first two incidents occurred during the first day of demonstrations.

Naval personnel aboard several ships in the Atlantic filed reports about a large, blue/green triangle-shaped U̳F̳O̳ flying low, at a speed of approximately 1,500 mph.

Shortly after, three U̳F̳O̳s were spotted flying in a triangular formation, at a similar speed. They left behind a visible trail in the form of “white light exhaust”.

“Suddenly it accelerated at an incredible speed towards the west turning onto a south-easterly heading before disappearing. All this occurred in a matter of fifteen to twenty seconds. The movements of the object were not identifiable with anything I have seen in the air and the rate of acceleration was unbelievable.”

The next sighting occurred the following day and, fortunately, a photographer was present. Unfortunately, the photos he took were never made public.

Operation Mainbrace’s flagship was the USS Franklin D. Roosevelt, a 45,000 ton Midway-class aircraft carrier. Aboard the USS FDR was press photographer Wallace Litwin and as he was taking photos of aircraft, another circular object showed up above the fleet.

He managed to snap three photos of the U̳F̳O̳ as it made some impressive maneuvers. The color photographs were examined by Navy Intelligence officers but the results have never been made available to the public.

During his investigations, Captain Edwin J. Ruppelt (the Director of Project Blue Book) was shown the photos, stating that “they turned out to be excellent… judging by the size of the object in each successive photo, one could see that it was moving rapidly.”

The same day, three Danish Air Force officers noticed a disk-shaped object pass them overhead and disappear over the horizon.

On September 21, six British pilots flying in formation over the North sea spot a shiny spherical object rising from the water and approaching their location. The pilots engaged in pursuit but the U̳F̳O̳ quickly disappeared from their sight.

On their way back to base, one of the pilots noticed the object was once again following them. He turned around to chase it but once again, it sped away.

Around the same time, panic ensued at RAF Sandwich in Kent, England, where all radar operators were staring at their screens in disbelief; their instruments had detected a huge unidentified craft the size of a warship, hovering at a high altitude over the English Channel.

By the time Operation Mainbrace was over, dozens of military personnel and civilians had witnessed these extraordinary events. The witnesses’ qualifications and the radar confirmation excluded swamp gas, weather balloons and the planet Venus. An extensive investigation took place afterwards but the results are still being kept secret.

Rumors say General Dwight Eisenhower was aboard the FDR during the operation, which would mean he was exposed to the U̳F̳O̳ phenomenon before he became president and allegedly struck a deal with a̳l̳i̳e̳n̳s.

Most U̳F̳O̳ researchers agree on the cause of these multiple sightings. It would appear that the large gathering of forces attracted the attention of the U̳F̳O̳s, which serves to strengthen the belief that we are being watched.

Any available documentation on this subject has circulated between the U.S. Navy and Air Force Intelligence, the RAF and NATO. Little information was released and, to this day, the sightings remain unexplained.