One of the founders of a new group created last month – the International Coalition for Extraterrestrial Research – explains its mission and why he is convinced that aliens often visit Earth.

Aliens have bases underwater and are trying to dissuade humanity from nuclear weapons due to the potentially catastrophic damage.

International Coalition for Extraterrestrial Research (ICER) it is a nongovernmental organization headquartered in Portugal and composed of scientists, researchers and academics from 27 countries. Their mission is: “Prepare for contact.”

Each ICER member has signed an oath that highlights their core beliefs.

Heseltine explains: “It says that after 70 years of worldwide research, we believe the evidence points to something real, intelligent and likely extraterrestrial.”

Yes, ICER believes that aliens exist and that they often visit Earth. It sounds like a plot from a Hollywood movie, but the group is serious and eager to discuss their theories in a rational and conclusive manner.

“My job and the job of ICER is to prepare for contact. We must now prepare for it to be real, as the evidence suggests it is real. We are dealing with something. Things that go beyond natural phenomena. In perspective, three percent of the world’s cases are happening something that is a genuine phenomenon that cannot be explained after investigation. Three percent of the millions of cases in the last 70 years is a lot. ”

Some experts report that these vehicles fly at hypersonic speeds, with an acceleration of 600 g, with no wings or a propulsion system. (For comparison, the F-16 can only fly at half that speed and at 9G). There is also a fighter pilot’s account of seeing the ship descend from 60,000 feet to 50 feet in 0.8 seconds.

Heseltine talks about UFO sightings or UAPs (Unidentified Aerial Phenomena) that include instant acceleration, instant stop, instant turn on the same course, all without deceleration, and right-angle turns without stopping at the turning point.

Other phenomena are really hard to comprehend: ICER claims that these vehicles can go from invisible to visible with the flick of a finger. And they all make no noise.

Experts agree that all of this goes beyond military capabilities – even secret, advanced programs.

Heseltine says, “This is why ICER insists that governments release information to study. The characteristics of UFOs are just something that we (humans) cannot realize.”

“ICER wants the scientific data from these incidents to be made public: telemetry, radar, performance, because the more closely the evidence is examined, the more ICER believes it will quickly prove it is not a man-made phenomenon.”

UFO sightings and speculation began in the 1940s. ICER believes that this is no coincidence, as it was when the first nuclear weapon was detonated.

“What a coincidence. I think that when we detonated our first atomic weapon, it sent an invisible shock wave into space, which was perceived by other civilizations, who then realized that this creature on our planet had reached such a level of technical achievement that it could split an atom “.

Continuing the theory, Heseltine reveals that Task Force 509 of the United States Air Force was the first squadron to carry nuclear weapons. It was their pilots who dropped bombs on Hiroshima and Nagasaki.

And their headquarters is Walker Air Force Base, which is located near Roswell in New Mexico and where the famous alien incident allegedly took place in 1947.

Since then, Heseltine said, there have been other nuclear incidents, such as the inclusion of a Soviet Union missile silo in 1982, seemingly by itself, and the unexplained shutdown of American silos.

This is in line with ICER’s belief that aliens are establishing bases in the deep basins of our oceans. 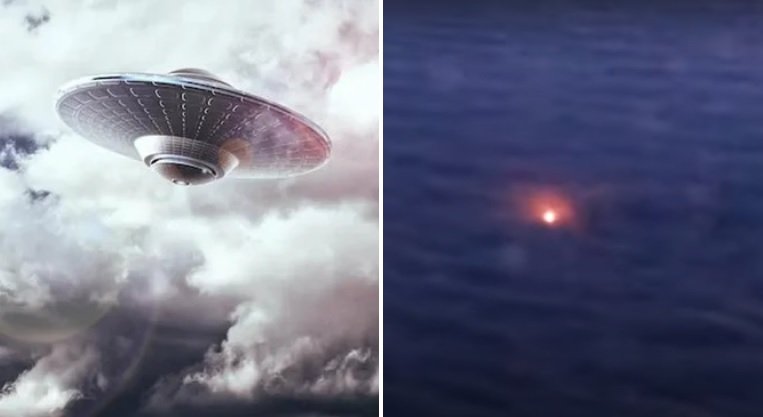 “Isn’t it logical, then, that they wouldn’t want to see Earth destroyed in a war of mutual assured destruction that would make the planet toxic? It would be wise if they said,” We don’t think you should be playing with nuclear weapons. “.

“We cannot prove all of this; you can prove the Roswell incident indirectly, but in terms of whether we can provide an alien body? No. Can we give you the final fragment or part of the wreck? No.”

This is again consistent with the ICER program, as they estimate that 90 percent of UFO information is hidden by governments.

“We’re calling for transparency. After all, you won’t get 70 years of secret government special access programs that Americans have been involved in. They’re not going to volunteer all of this.

“But now, at least admit these things are flying around, we do not know what it is, they can come and go with impunity, and now let’s throw everything on a global basis for a common goal. ”

There is one case where ICER considers the existence of secret programs to be credible.

Gary McKinnon was a Scottish hacker who hacked into the computer system of the US military. America tried to hand him over, but then-Prime Minister Theresa May prevented it. In an interview with the BBC, McKinnon told how he was looking for information related to UFOs, and saw a photo of the ship:

“This thing was hanging in space, the earth’s hemisphere was visible under it, and there were no rivets, no seams, nothing that is associated with conventional manufacturing man. ”

“You could argue that they are just doing their job, because he violated the law, or they really wanted to protect some things, he said, he had seen, and was talking about?

If it came to court, many leading scientists and UFO researchers would help him, and that would open up this broader UFO issue in public court, and at the time the Americans were definitely not willing to talk about it. ”

“There is no confirmation at this time since this is a story by one person and he cannot provide evidence of what he said he saw.”

Another signal for Heseltine was the closure of the UFO department by the British government in 2009. He explains:

“This was done in order to make collecting and collating material in the UK nearly impossible, and it worked. You can’t get any exact figure on how many cases are in the UK.”

ICER wants all of this to end, to be documented, and to have the concept of aliens introduced. They are in the process of creating a body of documents that they hope will enable them to obtain special consultative status with the United Nations.

“Let’s have an adult discussion, sit down and talk about it from the standpoint of one world. This is not an American, Russian or Chinese problem, this is a global problem, and we must see it as one global race, the human race.”

But then the question arises: if we have less intelligence, why then try to establish contact with us?

Heseltine’s theory is that Earth is a great vacation spot if you’re an alien.

“We send probes into the solar system and beyond, we do what they do, but they do it faster, because they are millions of years ahead of us.

“People ask me why they come here? I don’t know why they come here, but my theory is that this planet in this part of space is like an oasis in the desert, because it is full of water, rich in diverse life, I think that we are like the Great Barrier Reef ”

” We visit interesting places, so if you were a space tourist, why not fly to planet Earth and observe the inhabitants? ”

ICER was eagerly awaiting the US government’s Aerospace Threat Identification Program (AATIP) report, which was called the opening of the US archives and the disclosure of everything that had been kept secret since Roswell.

The nine-page document was released by the Office of the Director of National Intelligence on Friday, and it says there were 144 flying object incidents from 2004 to 2021, but only one of them can be explained. It was a large, deflating balloon.

In other cases, US authorities said they “lacked the information in our dataset to attribute incidents to specific explanations.” And although, according to a senior US official, “there is no clear indication that there is any unearthly explanation,” they did not specifically rule out such a possibility.

Heseltine was involved in drafting the ICER’s official response to the report, which called the US government’s communication on these issues “a major change” and ” long overdue. ”

The statement went on to say:

“ICER encourages all relevant parties to work together to establish the truth about these UFOs. ICER is confident that the more scientific research undertaken, the more evidence will ultimately confirm that planet Earth is under the influence of extraterrestrial / non-human intelligent beings “.

Heseltine believes the report will create an unstoppable momentum, which began with a 2017 New York Times article showing videos of ships that bear no resemblance to anything we know of. We may have reached the point where UFOs and aliens are no longer science fiction.

“The pressure builds up, this dam will eventually loosen and collapse. We haven’t gotten to that yet, but I think in six months or a year, if the momentum builds up, the dam will collapse quickly.”

“That’s when we start what we call the Big Disclosure; you’ll know when it happens, as it will be broadcast around the clock on all news channels like Covid.

” It will have psychological implications for humanity and some people will have a hard time. ”

Some will think that we will be invaded, like in the movie “Independence Day”. In fact, there can be many positive aspects to this. What if they say, “We have a cure for cancer!” What if we don’t have to use fossil fuels – they might have an anti-gravity machine that will help the climate and the planet?

“Everyone, be they scientists, academics, men and women on the street, everyone will say that this is the most important moment in human history.”
Post Views: 796