In the world of haunted objects, there seems to be something extra creepy about haunted paintings. Perhaps it has something to do with the intimacy of a painted canvas or the timelessness of the medium–the eyes of the subjects seem to look deep into your soul and sometimes these eyes even follow you no matter where you go.

The following is a collection of very unique stories of paintings that brought with them some very dark forces that no one–and I mean no one–wanted in their home.

The Hands Resist Him, a.k.a. the “eBay Haunted Painting”

This is often referred to as the most haunted painting in the world, and seemingly for good reason. It’s incredibly creepy to look at it and it has a pretty comprehensively disturbing backstory.

“The Hands Resist Him” is artist Bill Stoneham’s homage to a photo taken of him when he was a child, with the title taken from a poem written by his wife. The painting, completed in 1974, is creepy enough on its own.

Interviewed about it, Stoneham explains: “The hands were all of the possibilities….You were left with the question, ‘Are these disembodied hands? Are they dismembered, floating there in space? Or are they connected to bodies?’” 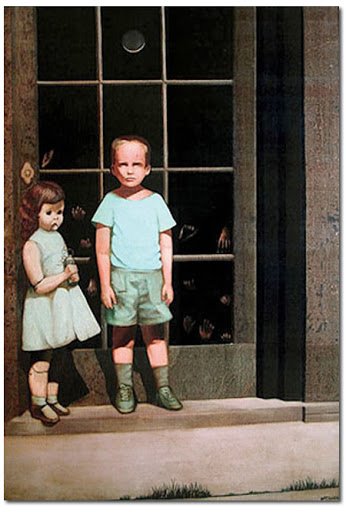 Within only a few years of its completion, three men closely associated with the painting–including the gallery owner who first contracted it and the patron (Godfather actor John Marley) who first purchased it–were dead.

The next couple to own the painting (a California couple who struck no one as the type to make up paranormal stories), begin to report incredible things–namely, that the figures in the painting were moving around at night and sometimes disappeared from the canvas altogether.

The couple got rid of the painting and for the next 26 years “The Hands Resist Him” actually sat at the back of a California brewery turned art space. In 2000, the painting resurfaced in an eBay listing. Evidently, another family–perhaps the owners of the brewery–wanted to get rid of it and posted an eerily similar message regarding the painting:

“AT THE TIME WE WONDERED A LITTLE WHY A SEEMINGLY PERFECTLY FINE PAINTING WOULD BE DISCARDED LIKE THAT. ( TODAY WE DON’T !!! ) ONE MORNING OUR 4 AND 1/2 YEAR OLD DAUGHTER CLAIMED, THAT THE CHILDREN IN THE PICTURE WERE FIGHTING, AND COMING INTO THE ROOM DURING THE NIGHT.”

Since then, the legend has grown, with even online viewers of the painting reporting feeling sick, disoriented, and disturbed after looking at it.

Sean Robinson’s grandmother stored this creepy painting in her attic for twenty-five years, claiming it was haunted by the artist who created it, who reportedly used his own blood as pigment and then committed suicide. 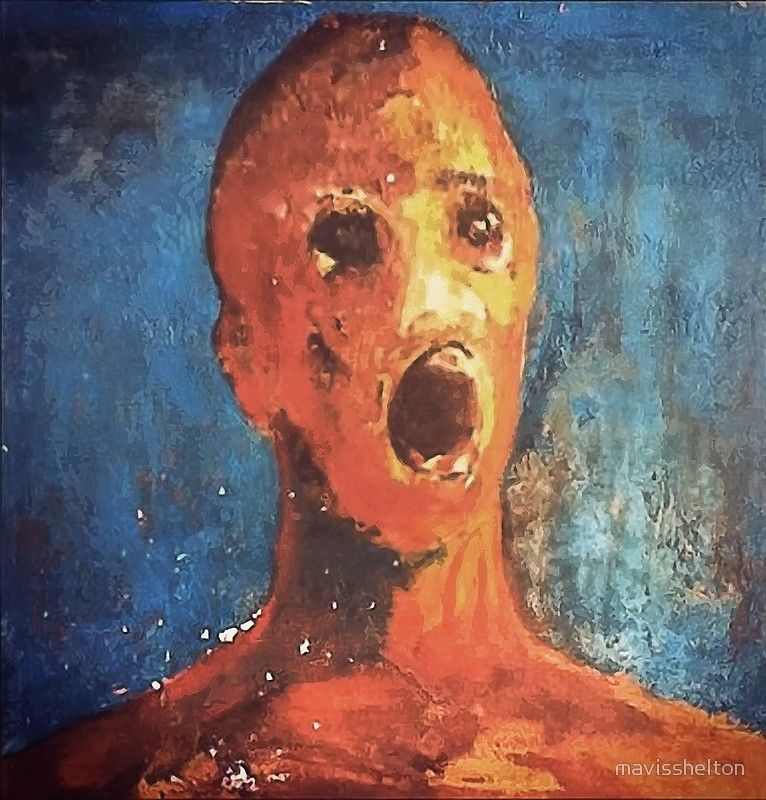 Sean’s grandmother further claimed to hear voices and crying sounds emanating from the attic–and the woman swore she once saw a shadowy figure of a man in her house that she felt to be the spirit of the artist himself. It was for these reasons that she had kept “The Anguished Man” locked in the attic for lo those many years.

After his grandmother died, Sean inherited the painting (yippee!) and took it to his home, where he lived with his wife and son. Immediately, Sean began reporting strange activity that was eerily similar to the stories from his grandmother–crying sounds and visions of a shadow man.

The activity escalated to the point where his wife began to feel that something was stroking her hair. After his son inexplicably ‘fell’ down the stairs (the boy claims a presence pushed him), Robinson set up a camera overnight to try to capture the paranormal activity. One of Robinson’s YouTube videos shows slamming doors, rising smoke, and the painting falling from a wall.

The Crying Boy and the Fires

Created by Italian painter Bruno Amadio, “The Crying Boy,” was one of a series of mass-produced prints of weeping children staring straight ahead in distress. In 1985, strange stories began to surface about “The Crying Boy” in particular.

“According to a report in The Sun, a firefighter in England claimed that several copies of “The Crying Boy” had inexplicably survived dozens of house fires. The firefighter went on to say that neither he nor his fellow fireman would allow any version of the painting in their homes as they believed the series was cursed. 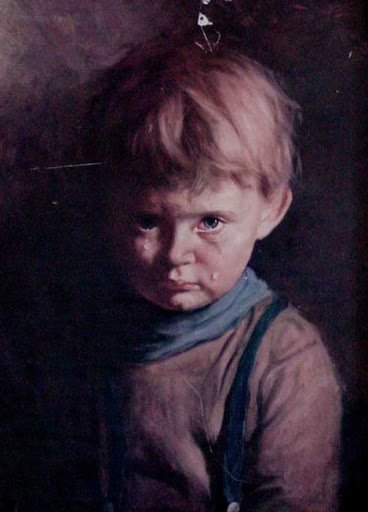 “Households with “The Crying Boy” reportedly had a high rate of fires, which caused some to speculate that the paintings were somehow setting homes ablaze. After reading the article in The Sun, many people were eager to get rid of the paintings, so the tabloid organized a Halloween bonfire to destroy the prints.”

Despite the purge, strange reports still surface related to this painting. There is even an incredibly weird BBC video of someone trying to burn the painting, which seems to repel the flames.

The Portrait of Bernardo de Galvez Watches You

The Hotel Galvez in Galveston, TX is renowned for housing several paranormal entities. Chief among them is the spirit of Spanish military leader Bernardo de Galvez, who fought for the American colonies during the Revolutionary War. He died in 1786, but according to countless observers, the portrait of him that hangs at the end of a downstairs hallway at Hotel Galvez, is haunted by the man’s ghost. 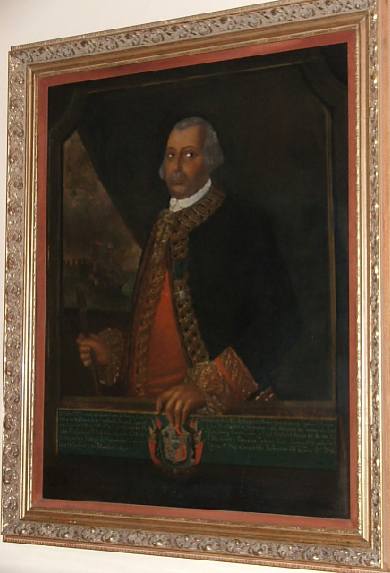 Dozens of guests have reported the portrait’s painted eyes following them as they walk down the hallway; they also report cold spots upon approaching the painting.

There is another phenomenon associated with the painting: evidently, tourists who try to photograph the painting claim they can’t get a clear photo of the portrait until they get permission from Bernando’s spirit.

A paranormal investigation team actually visited the Hotel Galvez for this specific purpose and claim that all their initial photos were blurry or distorted–only after they had verbally asked for permission did they capture a clear image.

Obviously, this painting doesn’t belong in someone’s home–but can you imagine that anyone would want it if that were an option?

The Painting of a Paranormal Photograph

According to strange little story in Paranormal.About.com, in the early 90s, artist Laura P. created a painting based on a supposedly paranormal photograph taken by commercial photographer James Kidd.

Kidd had taken a photo of a stagecraft in Tombstone, Arizona and upon developing it noticed something surprising: perched on a log left of the wagon there was a figure that had not originally been present when the photo was taken; moreover, the figure appeared to be missing its head. 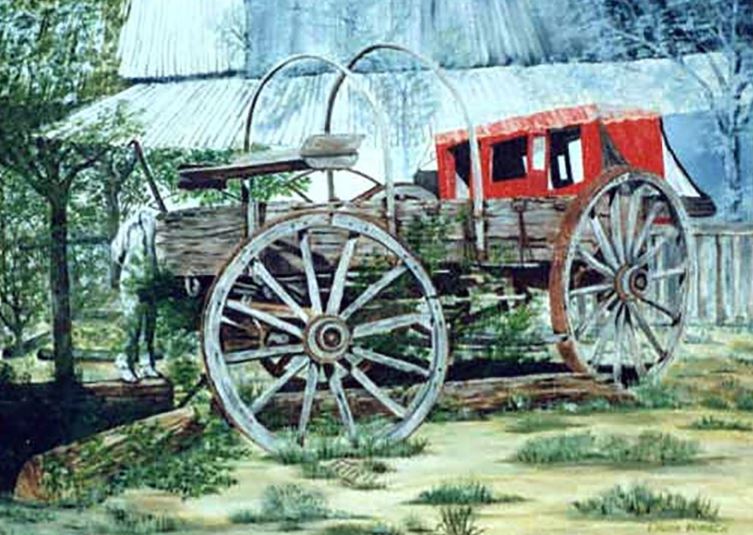 After hearing the story in person from Kidd, Laura was inspired to create a 16 x 20-inch oil painting based on the photo. Almost immediately upon beginning her work, she says, she was struck with unease as to why she had chosen this subject.

After finishing it, she hung it for display at a local business, but within three days she was called back to remove the painting because the people who worked in the office claimed that the painting was moving on its own, causing papers to go missing and, in general, making people feel uncomfortable.

The painting was returned and eventually taken along with Laura and her husband when they moved to their new home…where the anomalies continued–strange, small occurrences that persisted for years and always seemed to involve the painting or happen in close proximity to it.

Laura told some friends about the painting and one of them doubted the story vehemently and demanded to see the canvas with her own eyes. Upon seeing it, she laughed at it. According to Laura: “That night at [the woman’s] house, a clock that had been on the wall for 40 years, fell down and broke into a hundred pieces.”

Finally, a friend took some photos of the painting (which is weird in its own way, given that the painting itself is based on a photo). The friend claims he had laid the photos out on the table in his home and that when he went outside he saw a white hazy figure that seemed to be missing its head. He got rid of the photos immediately.

Laura now regrets ever painting the paranormal stagecoach and wants to destroy it.