This story is most often called “the incident with train No. 1702”, it happened in 1985 in the Karelian Autonomous Soviet Socialist Republic.

For the first time it was published in the journal “Technology of Youth” #8, 1989. Nowadays, it is rarely discussed anywhere, although this is one of the most unusual U̳F̳O̳logical cases on the territory of the USSR.

In February 1985, a freight train was carrying 70 empty wagons to Kostomuksha via Petrozavodsk and Suoyarvi. The locomotive was driven by the driver Sergei Orlov and his assistant V. Mironov. 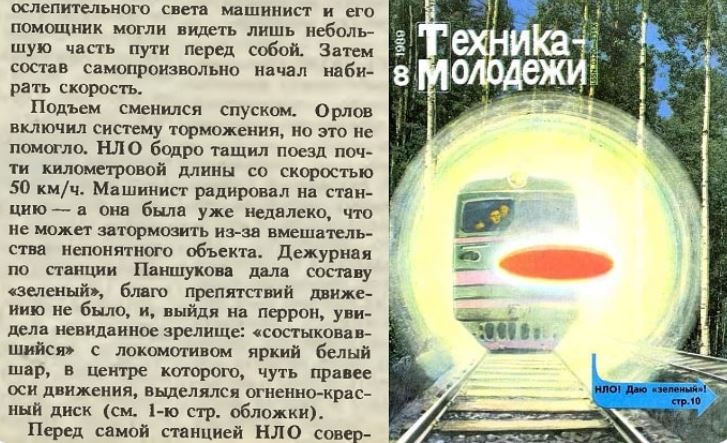 At 20:35 they passed through the Essoila station, everything was fine, the train was going according to the schedule. But then suddenly Orlov noticed some strange object in the shape of a ball from the side of the trees. The object moved parallel to the movement of the train and did not lag behind.

Orlov and Mironov closely watched the object, wondering what it was.

“Look, it released a beam of light to the ground, and then pulled it back …” – Orlov remarked. Then, the ball rushed sharply across the train and now “flew” in front of the locomotive, ahead of it by about 30-50 meters.

Orlov got scared of the alleged collision of the train with the “ball” and turned off the propulsion engines, and then pressed the brakes with all his might. But the train didn’t stop and didn’t even slow down, it continued to move forward, as if it were being pulled by something.

The shocked Orlov and Mironov could only look powerlessly at how the mysterious object was moving in front of the train and it seemed that it was he who was dragging the train.

Later they told the investigators of the Department of Internal Affairs that the object was of the correct geometric shape, about four meters in diameter, and it moved not high above the ground completely silently.

The train was approaching the Novye Peski station. Orlov turned on the radio and contacted the station attendant and told her about the mysterious object that had taken their train in tow.

The woman did not understand what he was talking about, but decided to go out to the platform and see with her own eyes. She was very surprised when she saw two (!) Strange objects flying in front of the train. 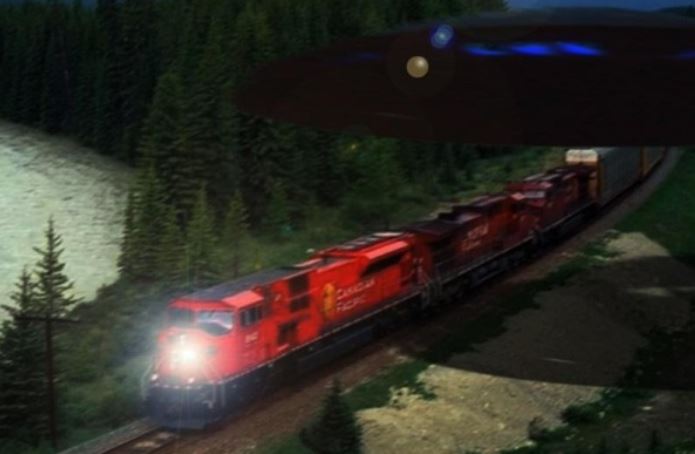 The first was a kind of vibrating apparatus (a classic disc-shaped U̳F̳O̳), the second was a luminous ball. They flew in front of a diesel locomotive, which was moving at a speed of at least 50 km per hour.

From their cabin, Orlov and Mironov could not see the second U̳F̳O̳, since the luminous ball covered it with itself, so it was clear why later they did not tell anything about it.

In front of the station, the train did not slow down at all and the attendant was frightened when she realized that the ball was moving directly to the station house and was now going to crash into it.

However, right at the arrow, the ball abruptly separated from the locomotive and smoothly flew around the house, and then returned to the train again.

The train, meanwhile, drove past the Novye Peski station, but at the moment when the ball flew off the train, its speed dropped sharply and various objects hit the driver’s cab, and Orlov and Mironov themselves were badly hurt, hitting the windshield.

But as soon as the ball returned to the train, the speed of the train increased again. When the train approached the station Zastava, the mysterious ball left the train again and disappeared somewhere behind the forest.

The train immediately slowed down and then managed to stop at the station. Orlov immediately jumped out of his cab to check if the train was damaged during the entire incident, but when he began to bypass the locomotive, a bright beam of light illuminated him from above.

This beam literally pressed the man to the side of the locomotive and he could move with great difficulty. Somehow he managed to get back to the cabin, and when he got into the cabin, the train went by itself, as if waiting for it.

So the ball dragged the train along for some time, and then for the third time flew away somewhere, and this time finally.

In total, the U̳F̳O̳ dragged a train with 70 empty wagons for 1 hour and 20 minutes for more than 50 km. It was noted that the U̳F̳O̳ helped the train save 300 kg of diesel fuel.

Orlov and Mironov did not suffer much physically, but they had a very strong nervous shock. The correctness of their testimony was confirmed by the diagrams of the recorders installed on the locomotive, and some documents.

However, none of the officials could provide a logical explanation for this incident. By the way, it was reported that a strange glowing ball was seen at the Karelian station Kutizhma and shortly before the incident with train.